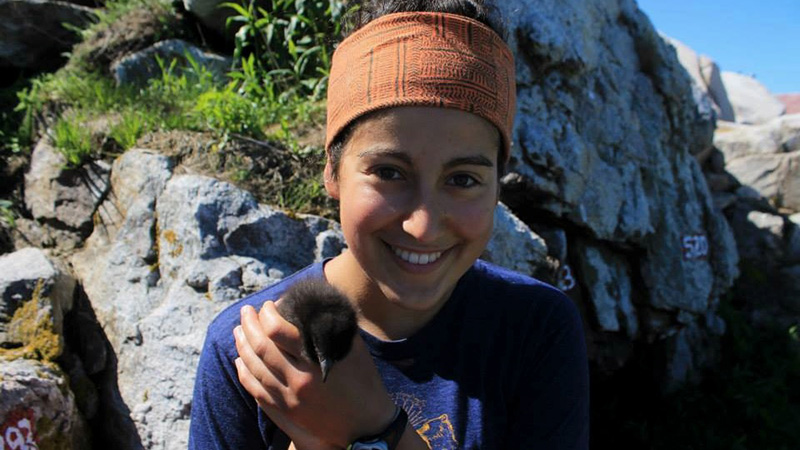 The resident seabirds have just started to settle in to prepare for another nesting season on Seal Island NWR! Terns are performing in-flight courtship displays while puffins are head tossing and calling loudly from the waters nearby. With the live cams back up and running for the summer season, be sure to keep an eye out for these courting behaviors!

This summer, new supervisor Isabel Brofsky and I will be overseeing the Seal Island NWR research team from Project Puffin, ensuring the conservation and research of the seabirds that we all have grown to love.

Isabel Brofsky is returning for her second season with Project Puffin after spending last summer with the seabirds of Matinicus Rock, just an hour boat-ride from Seal Island NWR. Last fall she worked with with HawkWatch International in the Goshutes Mountains of Nevada, banding hundreds of migrating raptors.

I am returning back to Seal Island NWR for my second season as Island Supervisor and third with Project Puffin. I am also currently a master’s fellow with the Northeast Climate Science Center at the University of Massachusetts Amherst working with Project Puffin to analyze the effects of climate change on terns and their primary prey species.

The two of us along with our team of research assistants, interns and volunteers will be studying several aspects of the life-histories of nesting puffins, terns and other seabirds. We are particularly interested in the diet of the young seabird chicks, their productivity (the average number of chicks that have fledged from each nest), longevity, as well as mate and nest site fidelity. We collect this data in a number of ways, including sitting in bird blinds to observe the fish species brought to chicks, using spotting scopes to read the band numbers of puffins and terns, completing daily bird counts, and weighing, measuring and banding young chicks.

In addition to monitoring puffins during the breeding season, Dr. Steve Kress & Project Puffin recently published significant findings tracking puffins to their secretive wintering grounds. Over the past several years, biologists and interns working with Project Puffin on Seal Island NWR and Matinicus Rock have been deploying tiny data collection devices called GeoLocators, which attach to a band on the puffin’s leg and have special sensors to measure daylight and calculate where a bird has been travelling. Over the past few nesting seasons we have been re-capturing birds that have worn these tags at sea anywhere from 1 – 3 years. Using the data collected from these tags, Project Puffin has solved mystery of where puffins that nest in the Gulf of Maine spend their winters. When puffins leave Seal Island NWR in August they first fly north to the Gulf of St. Lawrence in Canada to feed during the fall before flying south again to pelagic waters of the continental shelf far offshore from New York and New Jersey.

We are also very excited to introduce a new camera this summer that overlooks Great Cormorants nesting on the western head of Seal Island NWR. Great Cormorants are a declining and unusual breeding bird in the United States but, are more common further north and through Europe and Asia. In fact, the only breeding colonies in the United States are in the Gulf of Maine and the largest is on Seal Island NWR. These birds are a colonial nesting species just like puffins and build large stick nests on rocky cliff ledges. They are truly a beautiful bird, towering over the smaller and more common Double-crested Cormorants with their striking yellow throats and white cheek and flank patches. So please, when you aren’t watching the puffins, be sure to check out their impressive and fascinating neighbors, the Great Cormorants!