How “Fish Out of Water” Inspired Dog Bless You

Fish Out of Water, winner of the Telluride Mountain Film Festival, is a documentary about wounded soldiers returning from war and trying to find healing through nature. This film is a pivotal moment in defining Explore’s history.

First and foremost, it is where Dog Bless You’s involvement with soldiers who have PTSD begins.  One hot afternoon, Lucky, my loving golden retriever, and I were told to get Bill, a young army kid from his room to go fly fishing.  When I entered, Bill was hiding under his bed, face down and trembling.  He yelled at me, “Get out, dude!” (my nickname inspired from the film the Big Lebowski). I told him “I don’t blame you, it is too hot to go fishing but that if I had to go, you have to go because it was unfair.”  As I spoke to him, I noticed Lucky approach him.  Lucky lay flat on the cool cement floor and put his paw on his arm, indicating that he wanted Bill to pet him. I told Bill that I had an idea, “Lucky doesn’t want to go either, can you do me a favor and watch him?” And just like that, I walked out of the room.

I will always wonder what happened within the next few minutes as I entered the van and told everyone that Bill wasn’t going and was dog sitting.  The next thing I know Bill and Lucky walk outside smiling and enter the van sitting side by side.

We never spoke about this moment but you felt the magic between human and dog.  A special relationship, an understanding so deep and pure it transformed me. 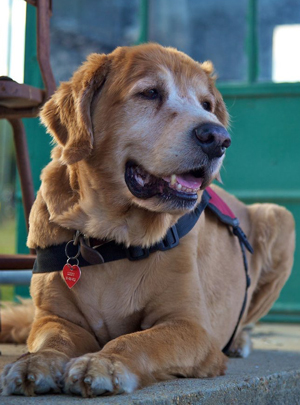 Lucky shaped not just Bill but everyone on that trip and from this moment on I realized the seeds of supplying dogs to soldiers had arisen.

I’m proud to say there are over 200 Dog Bless You service dogs in existence.  If I could do one last film at Explore, it would be to visit them. Not to talk about the hardship of life, but rather to celebrate the unconditional love and healing that are animals provide us.

Lucky has since passed away but his spirit lives in all of us.  He was my guardian angel, my best friend and I’m honored that he taught me how the simple act of providing soldiers to service dogs would change lives forever.

God bless America and to all who serve so selflessly.

Tomorrow I will tell you part 2 of this story, the birthplace of Fallujah the Opera.

You can watch Fish Out of Water here: