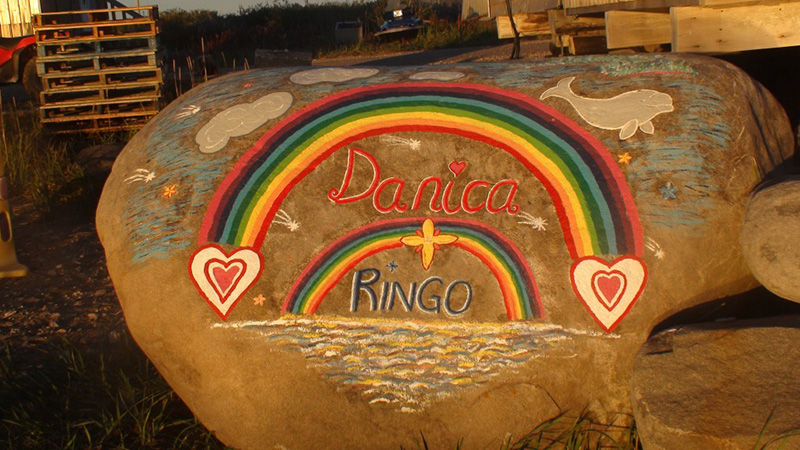 The summer season seems to move through so swiftly in the Churchill region, influenced by our 58 degrees of latitude and the Sub-Arctic climes. It would have been much easier to end the Beluga Boat Season had we experienced a typical fall day with strong bitingly cold winds blowing from the Northwest and dwindling Belugas. Our last two days on the water certainly felt as though the whales were rapidly moving north, but the weather offered sunshine, calm seas and there was welcoming warmth to the air.

As the Beluga season draws to a close, I cannot help but reflect on the summer that has been. It is a particularly emotional end, due to the tragic way it began. During my first day in Churchill, as we rigged the Beluga Boat ready, a family whom I knew ventured out on the Churchill River by canoe: a father, two children, a son and daughter, and two small dogs. A sudden capsize occurred and after spending approximately 30 minutes in the turbulent frigid water and numerous hours in our hospital Emergency, a dear little five year old girl did not make it and one dog was never found again. This tragedy numbed the town of Churchill.

It was difficult to bounce back from this awful beginning and even though the Belugas visited our Zodiac cloaked in curiosity, I was unable to feel the joy. A dark and foreboding shadow lingered over the Churchill River. It was after receiving the news of the four year old boy, awakening from a coma that brought hope and the will to move through these dark times and welcome back the joy of what the Belugas bring to all of us.

Despite it being officially ‘Beluga Season’, it was the season for Polar bears. We had numerous encounters of summer bears play-fighting in the shallow waters around Eskimo Point and I recall the mix of emotions as we escorted the mother and her two young cubs across the river away from the town. Having the opportunity to snorkel with Belugas was a highlight as I got the chance to hear the surround sound from their vocalizations with my own ears, and not being able to see them when hearing them due to the limited visibility, added to the experience. And finally, the sudden glimpse of a bearded seal and numerous sightings of new born calves, some which approached the Beluga boat so closely, will all be stored in my memory as special moments.

Most days I had a boat full of locals who delighted in the company of their ‘backyard’ visitors. It is always a pleasure spending time with and hearing stories from those who call Churchill their full time home, including our enthusiastic interns who absorbed this experience of a lifetime like a sponge.

During the final moments of our last tour, with the engine turned off, I drifted with the current on a mirrored sea and said goodbye to the Belugas, wishing the new born calves a successful first winter. I also said farewell to my dear buddy Ringo the dog, and the beautifully spirited five year old Danica. They will always be fondly remembered, swimming free amongst the Belugas for all the summers to come.