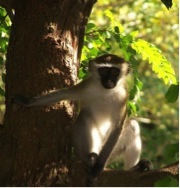 Getting to Know the Animals of Mpala: Most Common Visitors

This summer we launched our Africa Wildlife Cams in partnership with Mpala Research Centre in Lakipia, Central Kenya. The Cams are located in a section of the Ewaso Ng’iro River teeming with wildlife where more than 20 species have already shown up on the cams. We thought you should meet some of our African stars!

Some of the most common species that have shown up to hang out for your viewing pleasure are the Anubis Baboon (also known as the Olive Baboon) and the Vervet Monkey. Look for these playful troops in the mornings on the River Cam, when they descend the top branches of river-side Acacia Trees where they sleep and head to the water to find some food… and some mischief.

Incredibly popular research subjects, Vervet Monkeys been noted to have human-like conditions like hypertension and anxiety. They also have a vast range of communication sounds for group and offspring recognition and alarm calls for predator sightings, all of which have also been studied extensively.

Two other species that are commonly seen grabbing a drink from the Ewaso Ng’iro are the Impala and gorgeous Greater Kudus. Greater Kudus have characteristic two and a half twist horns, between 4 and 12 white stripes down their sides and a distinct white chevron between their eyes. Male Greater Kudus are larger and are distinguishable by the manes across their throats (don’t call them beards, at least not to their faces).

Click here to read our guide to Predators! We’ll introduce more species in coming blogs, so be on the lookout and get your snapshot trigger fingers warmed up… you won’t want to miss a thing.