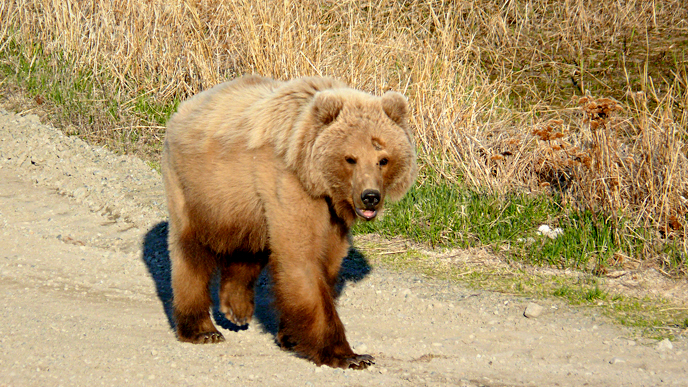 Bones Don’t Lie: Evidence of a Bear’s Perseverance Through Trauma

On July 1, 2014, bear 130 Tundra was found dead near Brooks River. Since this bear was well known by rangers and the public, her skull was collected and cleaned so it could be used for educational and interpretive programs. As it turns out, Tundra’s skull reveals a biography of trauma she apparently suffered through several years before. Bones don’t lie. They tell the story of pain and healing. As a yearling cub, this bear apparently persevered through potentially traumatic damage to her skull.

Her skull tells the story. Every skeleton, including those of humans, records a “bone biography.” Bones change size and shape in response to forces placed on them. Stress from repeated use can deteriorate or thicken bones. As fractures heal, bones record a scar of the event. It’s no different for animals. A fracture will be recorded in the bone as it heals.

In late June 2008, when 130 Tundra was a yearling cub, she sustained an obvious injury to the left side of her head. No one witnessed the cause of the injury, but it did produce a distinctive scar that allowed us to easily identify the bear. However, in 130’s case the fur on her face and head may have hidden a more traumatic injury than a simple, bloody flesh wound.

As a yearling, 130 Tundra sustained a head injury that left the right side of her face bloodied. NPS photo.

Even though this bear was obviously injured as a yearling, I don’t recall that her behavior was somehow different or abnormal for a young bear. As an independent bear, she bore a scar from the injury, but was able to fish and play like any other subadult bear. As she matured into adulthood, 130 Tundra did not seem to suffer at all from the injury.

Her skull reveals another side of the story. The left side of her skull is obviously misshapen, and the deformity is exactly where her face was bloodied in 2008. Mammal skulls are bilaterally symmetrical. One side is a mirror image of the other. 130 Tundra’s skull doesn’t hold this pattern though.

The deformation in the skull is very noticeable from above and behind. More photos of the skull can be seen on Kamtai’s Flickr page. NPS photo.

Is the deformity a result of a skull fracture that has since healed? I posed this question to Grant Hilderbrand, the regional wildlife biologist for the NPS in Alaska. Grant wasn’t able to examine the skull in person, but remarked that the deformation in the skull could have been caused by a blow to the head. Perhaps her skull was fractured when she was a yearling, and remarkably she persevered through it.

Bears are often injured. 2008 was only my second summer working at Katmai, but even by then I was used to seeing injured bears. It is common to see them with fresh wounds or even broken bones. In many, if not most, cases they are resilient in the wake of severe injuries and get on with the business of survival.

130 Tundra’s skull appears sunken above her left eye in the fall of 2008. By this time, she appeared to be healthy and normal. No observable evidence hinted that she could have suffered through a skull fracture. NPS Photo.

Apparently, her injury as a yearling was more than skin deep. This bear’s bone biography provides a record of significant injury. There is no evidence that suggests this old injury contributed to her death in 2014. Yet one fact is certain: 130 Tundra persevered through any pain or disability caused by the apparent fracture. Long ago, I was convinced that bears are extremely tough and durable animals, but for me this, perhaps final, chapter in 130 Tundra’s story only solidifies that fact.