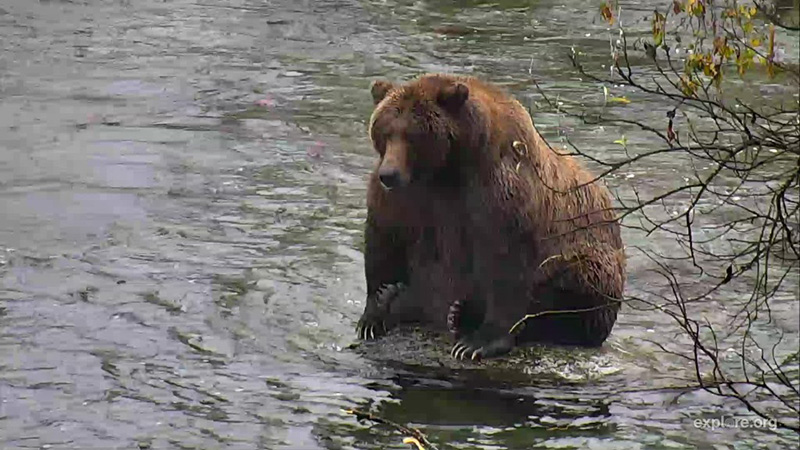 July in September continued for the second week in a row, not that any chatters were complaining :). In another day, we will be into October….  Yes, I know you all have a calendar, but I have to keep reminding myself of this because we are still seeing such a large number of bears fishing at the falls!  They are crowding in like it was July.  We’ve seen at least 11 in the cam view at the same time this past week. 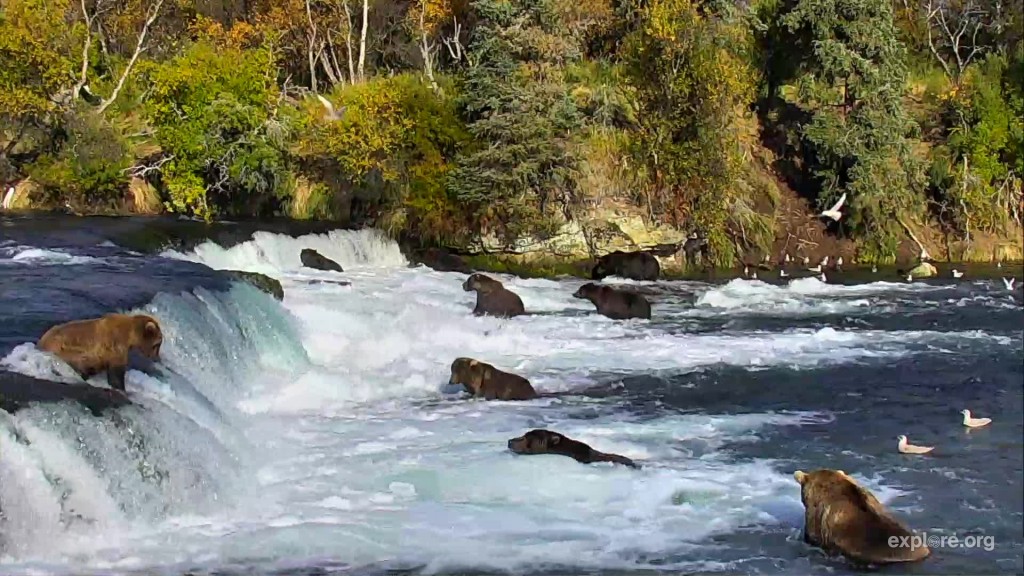 9 Bears at the falls in September 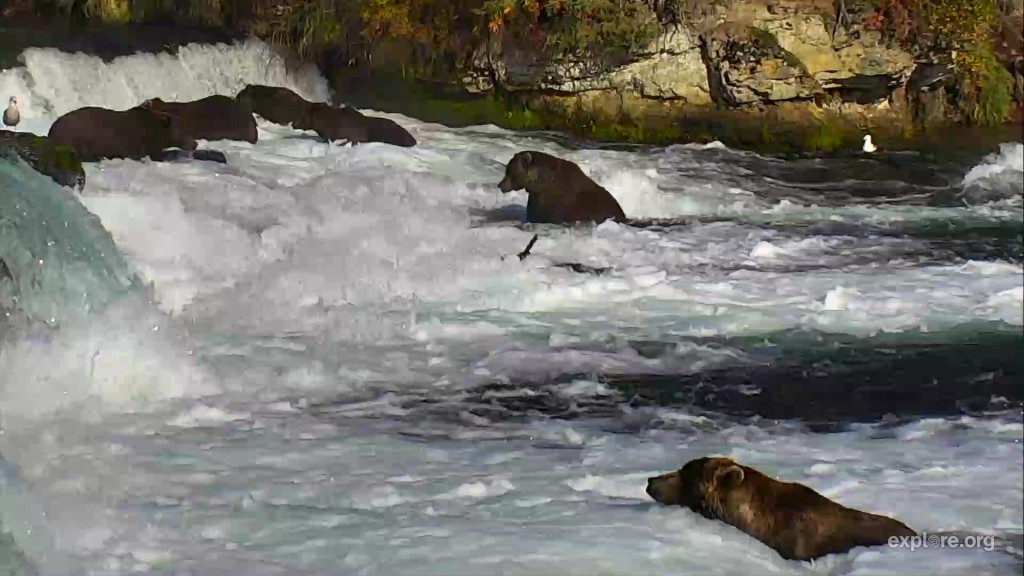 Standing room only in the far pool

All the males using the falls still seem to be doing some sparring over who is dominant over who.  The same two bears can have an interaction on two different days, and there might be two different “winners”.  Some examples:  474 and 32 Chunk continue to confront, posture and scent mark territories.  After one walks away, the other may go back and re-scent mark the same areas. 474 has been seen to move for 856.  32 Chunk seems to have displaced 856 from the Jacuzzi; but days later is unable (or unwilling) to displace 83 despite returning to growl and challenge him a few times. Previously 32 was seen begging scraps from 83! 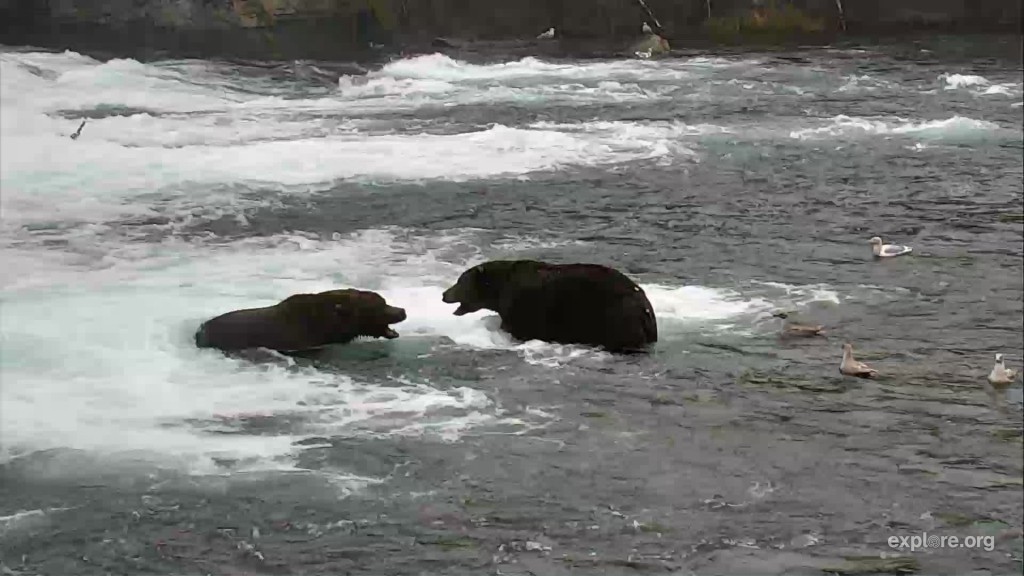 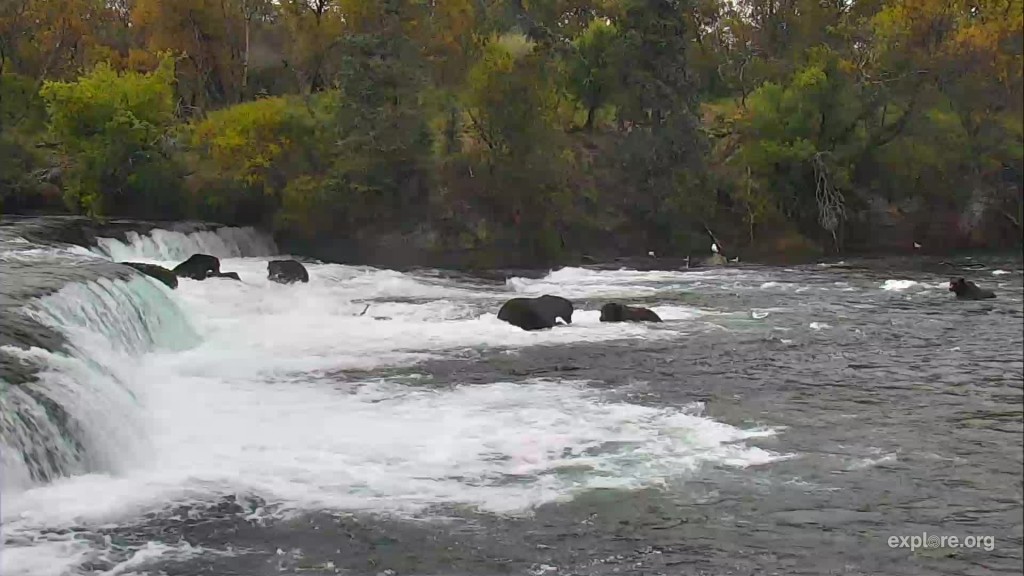 83 attempted to displace sub adult 503 Cubadult from the Jacuzzi one day.  503 stood up to him and 83 walked away.  The next day we had a repeat performance and this time 503 did yield the Jacuzzi!  747 and 856 continue not directly challenging each other, but will wait for the other to leave and then take over the desired spot. Video of the interaction can be seen here. (captured by BrendaD) With all the bears at the falls and not a lot of room for them all, one industrious subadult placed themselves at the end of the island and waited for scraps to float down the side of the island and grab them before they went down river. 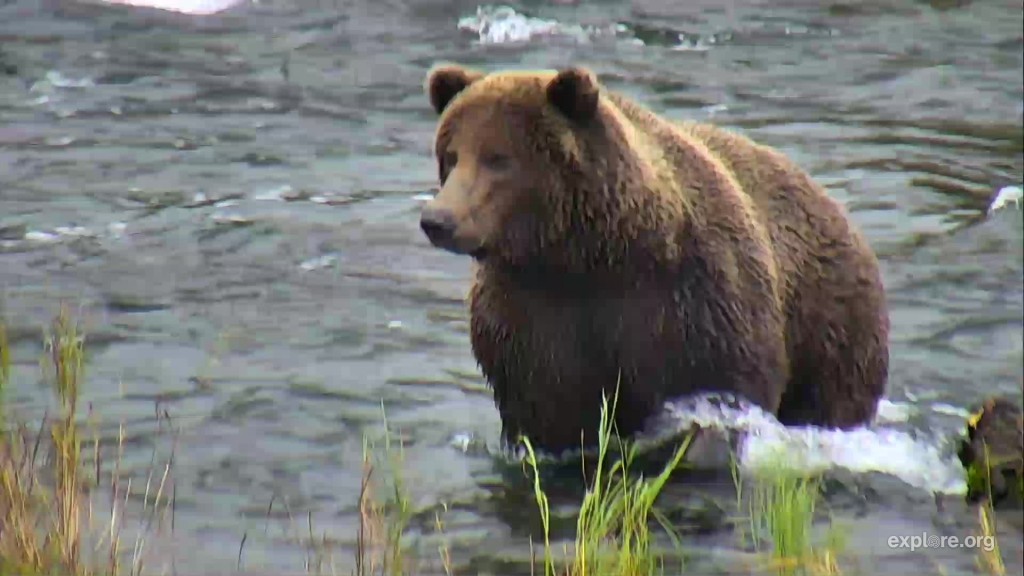 Subadult intently watching for scraps to float down river 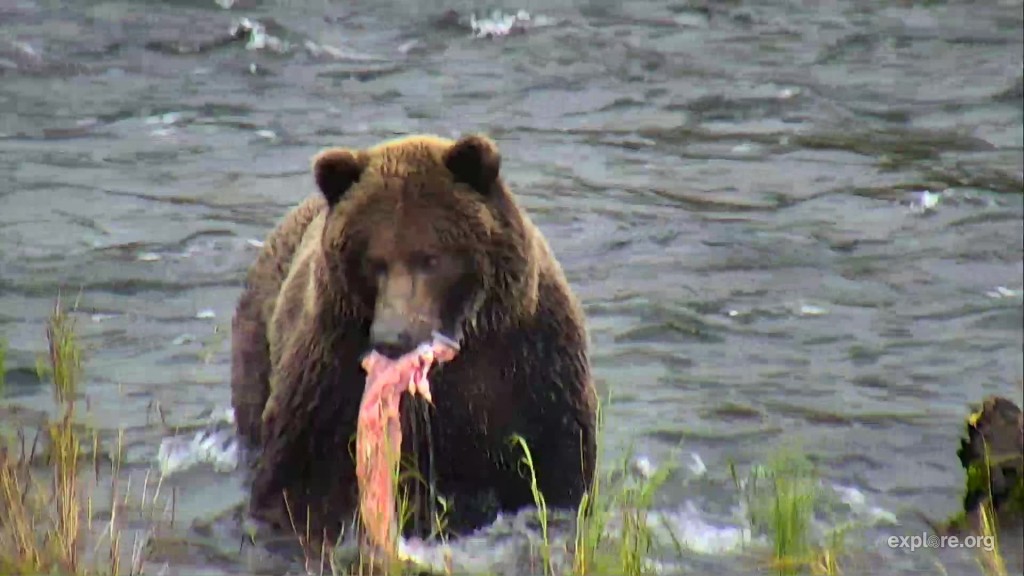 This same subadult got a little braver as the evening went on and came around close to where 747 was eating and as the salmon started to float down stream he ran towards 747 to grab the salmon. 747 got up quickly and charged the subadult. Video of the interaction can be seen here.

480 Otis also used this fishing technique and used 503 Cubadult to catch his salmon for him as he sat behind the Jacuzzi and waited for the scraps from 503. 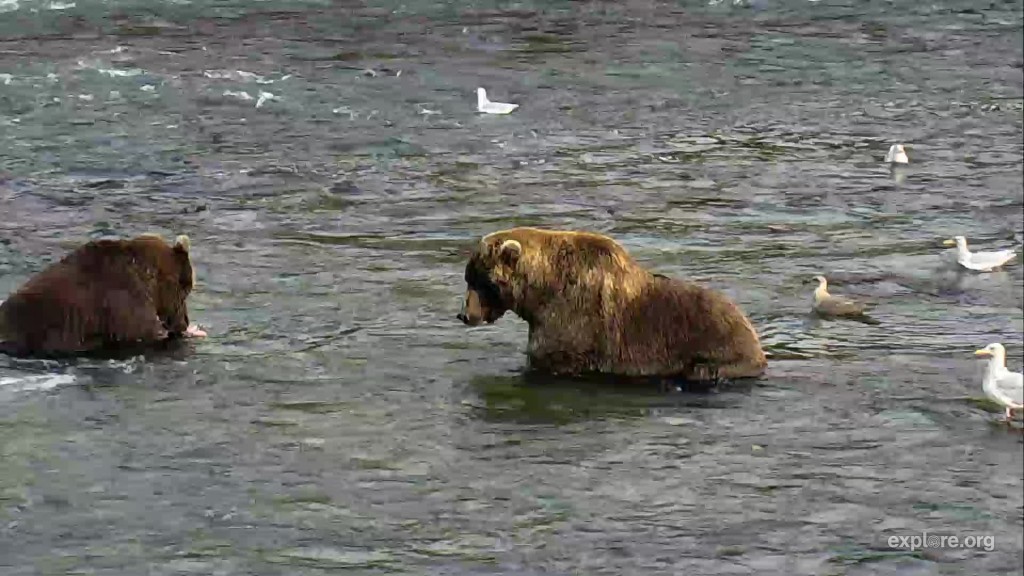 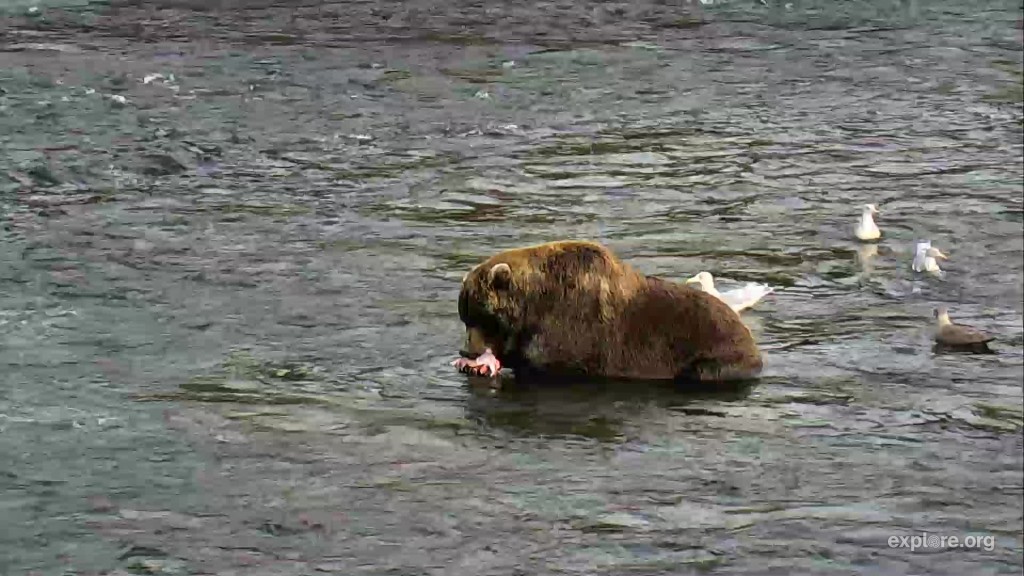 708 Amelia and her large 2.5 year old cubs have continued to practice their pirating fishing technique.  They have been targeting the sub adult who has become quiet proficient at fishing the lip of the falls.  They have managed to steal her fish many times.  Last week, there was a different turn of events for one of the cubs.  They had attempted to steal the subadults fish.  The subadult dropped the fish above the falls and left.  The two cubs were searching the water for the lost fish (which they never found).  In the end one of the cubs wandered too close to the edge of the falls…..  And was carried backwards right over the falls.  I think I heard a bit of good nature snickering from some fans who were rooting for the sub adult.  🙂 Video of the attempted pirating can be seen here. The 708 family also chases down sub adults down river, across the island or wherever they think they can obtain an easy meal. 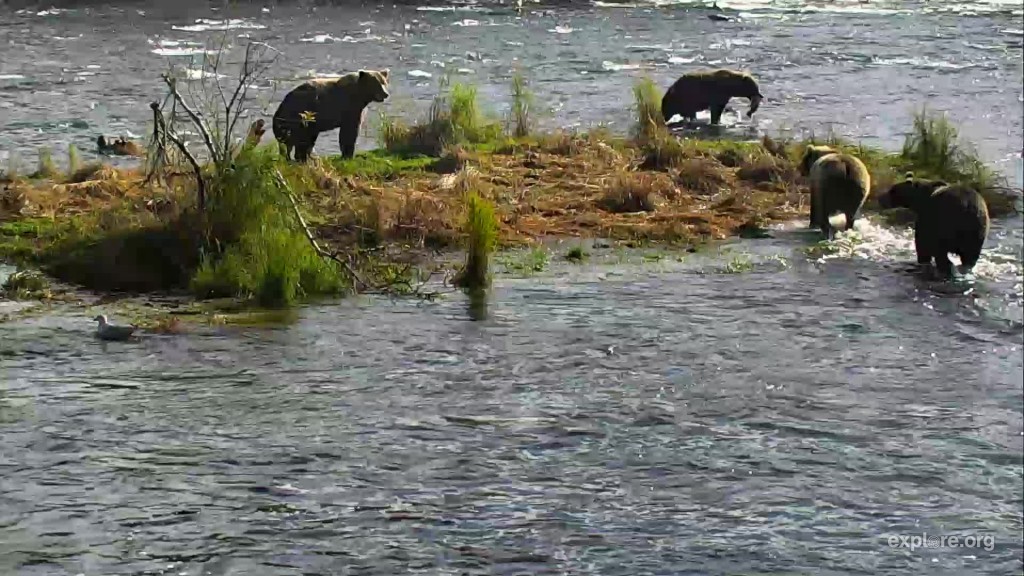 708 Amelia and cubs chasing subadult across the island

Not to be outdone by a cub sliding over the falls, 503 Cubadult decided to give it a try himself!  Not wanting to be too obvious by just jumping off, he twisted and turned until he “gracefully” slid over the edge….much to the surprise of 32 Chunk who was fishing in the Jacuzzi below at the time.  503 made a nice try at saving face by grumbling at 32 for acting all disturbed about it. Video can be seen here. (Captured by BrendaD) 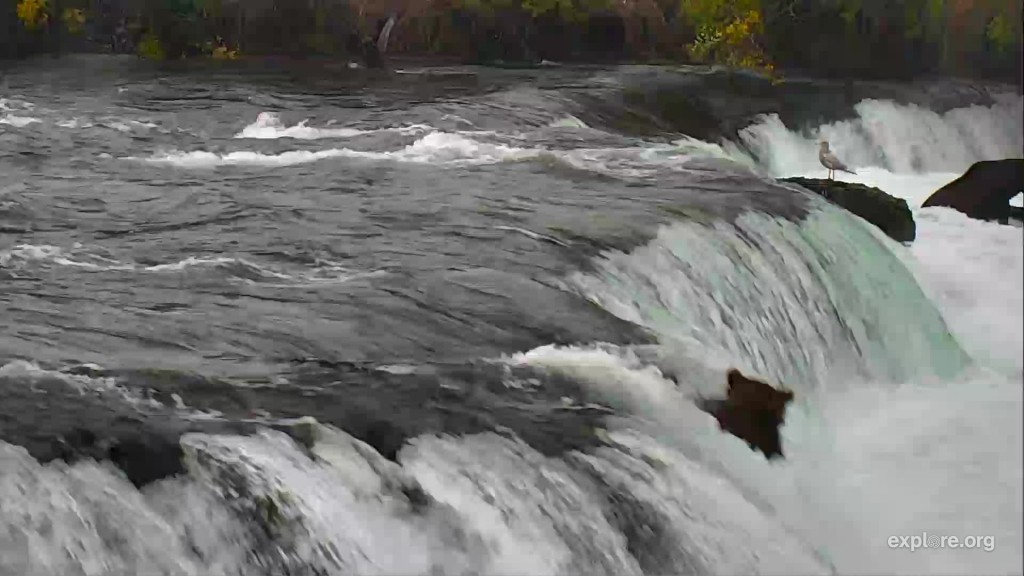 We’ve been continuing to be entertained by play-fighting behavior of sub adults and adults.  503 Cub Adult has still been playing with 151 Walker.  503 has also been seen playing with an unknown bear (who has lighter patches of fur on both shoulder areas). Video of one of 503 and 151 Walker’s play sessions can be seen here. 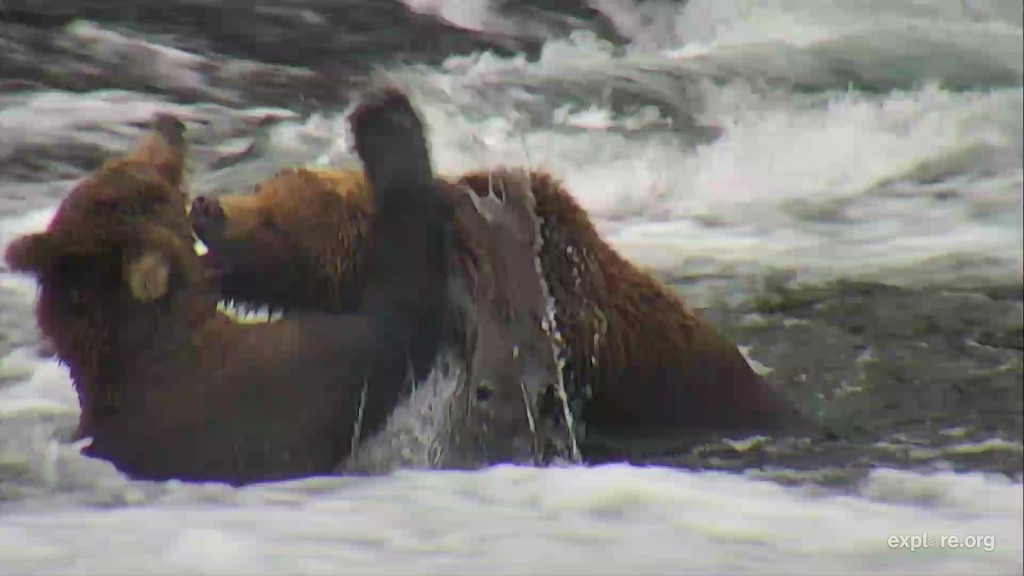 503 playing with unknown subadult in the Jacuzzi

Female 402 has made an appearance at the falls a few times this week.  Being without cubs this season has given her a great opportunity to become quite fat!  She posed on a rock for us, demonstrating just how big she is! View the cute video here.  She has tried out her diving skills in the Jacuzzi.  This bear truly dives….  submersing her entire body and going after a fish – resurfacing in a slightly different place. She also tried her paw at fishing the lip. 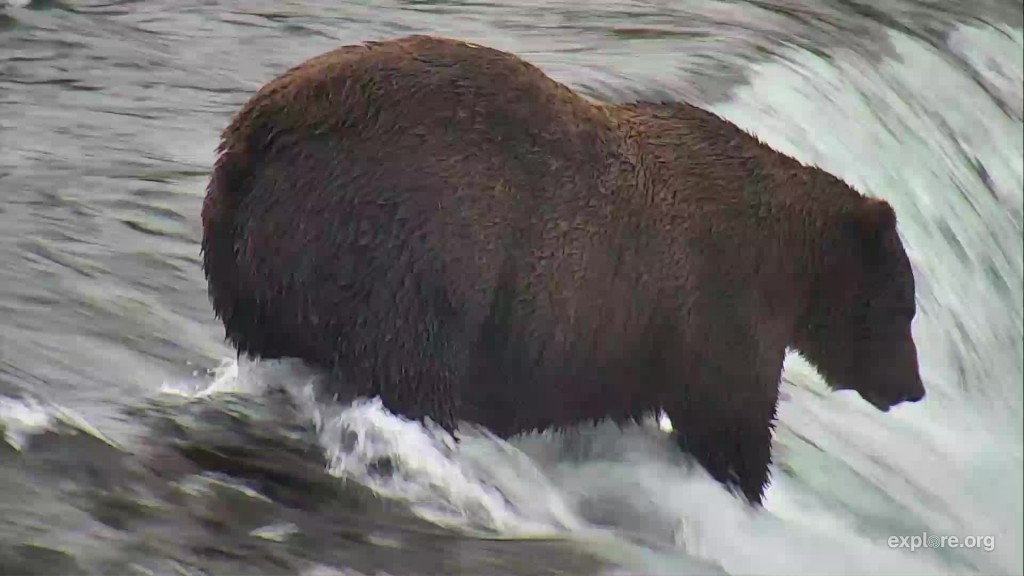 We had the return of another family group this past week. 153 and her three yearling cubs were spotted in the riffles. All three cubs looking very plump and healthy. They were also spotted at the falls later in the week. Video of them in the riffles can be seen here. 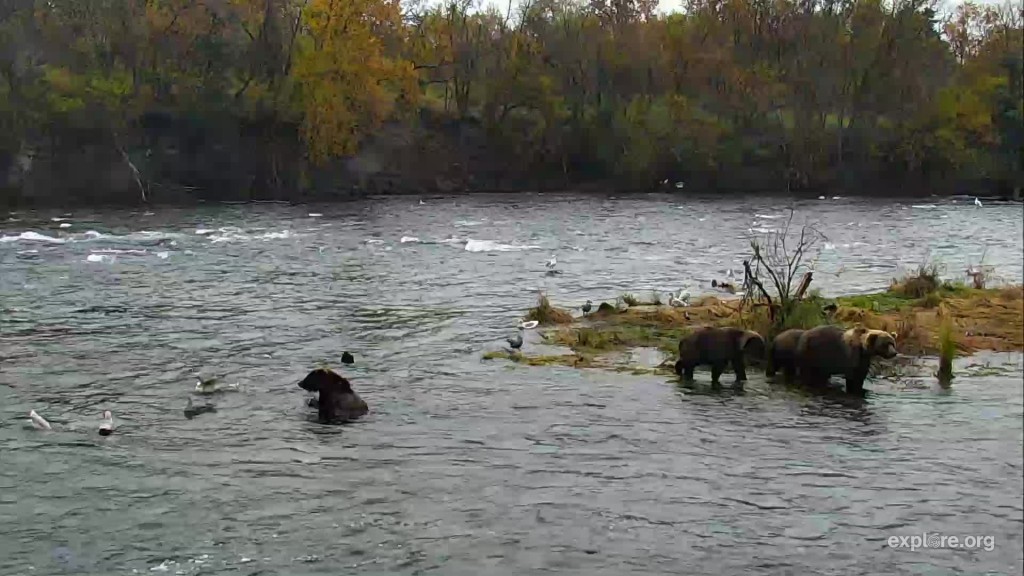 In other news this week, Ranger Dave has announced that the annual Fat Bear Contest will commence beginning next Wednesday, October 4.  Fans are already campaigning and creating Fat Bear posters for their favorite candidates.  Further details and the brackets and candidates will be posted on Katmai National Park’s Facebook page found here. and also in the comments below the Bear Cams. as they become available. 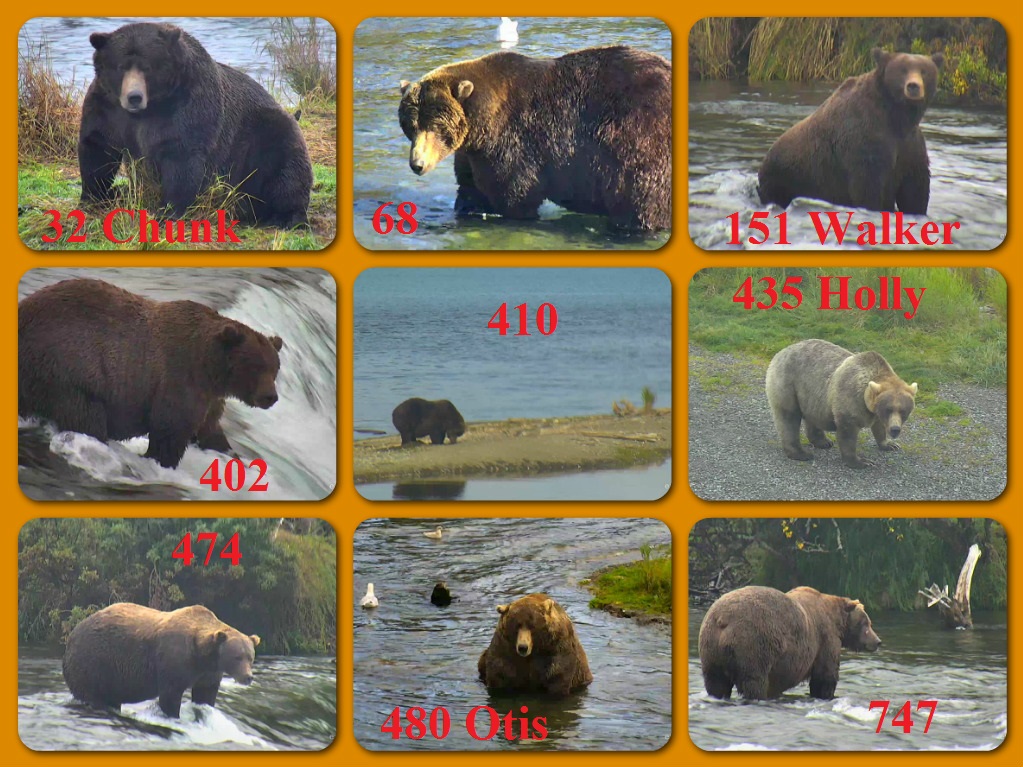 Mike Fitz also has a new blog out this week read about injured nose bears here.