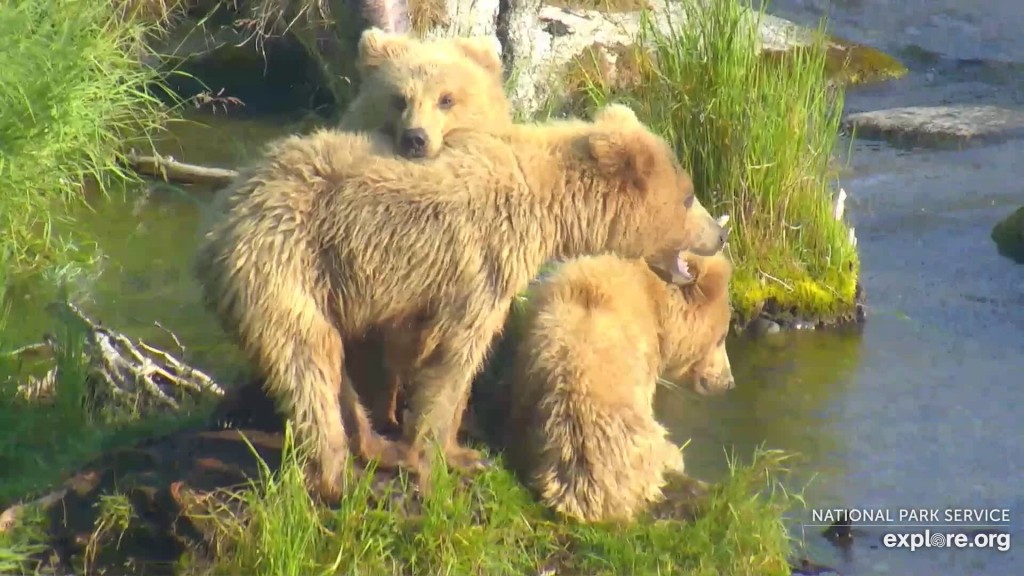 Katmai National Park’s brown bears are packing on the pounds in preparation for winter hibernation. National Park Service rangers and explore.org’s resident naturalist, Mike Fitz, have many live events in store this month. And, don’t forget to watch the famed brown bears of Brooks River every day on explore.org.

Join park rangers and other experts for in-depth conversations about brown bears, salmon, and other topics. Find these events on the Brooks Live Chat channel. And, if you miss any of our live chats, you can find the replays on our Bears and Bison YouTube channel.

“Journeys at Katmai: An Activity Book for Not-So-Junior Rangers” will allow adults of all ages to learn about Katmai’s history, wildlife, and changing landscape. Some Katmai journeys reach as far as the moon! The lunar-like landscape of the Valley of Ten Thousand Smokes was once a training spot for NASA’s Apollo astronauts. Join Katmai rangers Sarah Gage and Lian Law for a live discussion to learn more about the fun history of the Valley and the exciting new activity book.

Many of explore.org‘s cameras broadcast from remote areas where their installation and maintenance can be difficult to say the least. The bearcams at Brooks River in Katmai National Park, Alaska pose a particularly unique set of challenges. Join Ranger Naomi Boak from Katmai National Park she talks the tech of the bearcams with explore.org‘s Candice Rusch, Director of New Media, and Joe Pifer, Field Operations Manager.

The behavior and movements of bears at Brooks River change over time, so what might this mean for National Park Service managers who are tasked with protecting the wildlife and how do biologists track bear use of the river? Join Mike Fitz as he interviews Katmai’s wildlife biologist Leslie Skora on the bear monitoring program at Brooks River, the long-term study to document bear and human use of the area.

Ranger (and now Dr.) Michael Saxton tells us about his DNA study of the bears of Brooks Falls. Over the past several years Michael collected DNA samples of bears in part to try and understand the genetic diversity of brown bears at Brooks River and along Katmai’s Pacific coast. Join Ranger Naomi Boak as she interviews Michael about his research and about how climate change may affect the bears.

Ever wonder what birds you’re seeing on the bearcams? Join Ranger Andrea Willingham for a live chat all about the birds of Brooks River. It’s an opportunity to learn more about Katmai’s frequent flyers, and how they connect our beautiful national park to the rest of the world.

Fewer bears use Brooks River in August compared to July and September, so where do they go? Join Katmai National Park rangers Lian Law and Naomi Boak as they journey to places beyond Brooks River where bears make a living.

Snowshoe hare and lynx are just two of the many animals that call Katmai home. Their lives are inextricably linked together. Join Ranger Cara Rohdenburg as she delves into this predator-prey relationship.

What challenges does Katmai face now and in the future? Get a superintendent’s perspective on the national park’s current priorities, issues, and plans for the future when Ranger Naomi Boak interviews Mark Sturm, superintendent of Katmai National Park.

A favorite of rangers and bearcam fans alike, play-by-plays are live events when rangers and other experts narrate the bear and salmon activity at Brooks River. It’s an opportunity to learn more about the individual bears on the cams and how they survive. Find these events on the Brooks Live Chat channel. You never know what might happen!

Chat in the comments with Mike Fitz, explore.org’s resident naturalist, and rangers from Katmai National Park during our weekly Q & As. Bring your questions about bears, salmon, and Katmai.

Did you see something on the bearcams you’re curious about? Or, would you like to submit a question in advance for our live events? Ask it here. Rangers and expert staff may answer your question in a live chat, in the bearcam comments, or in a blog post.