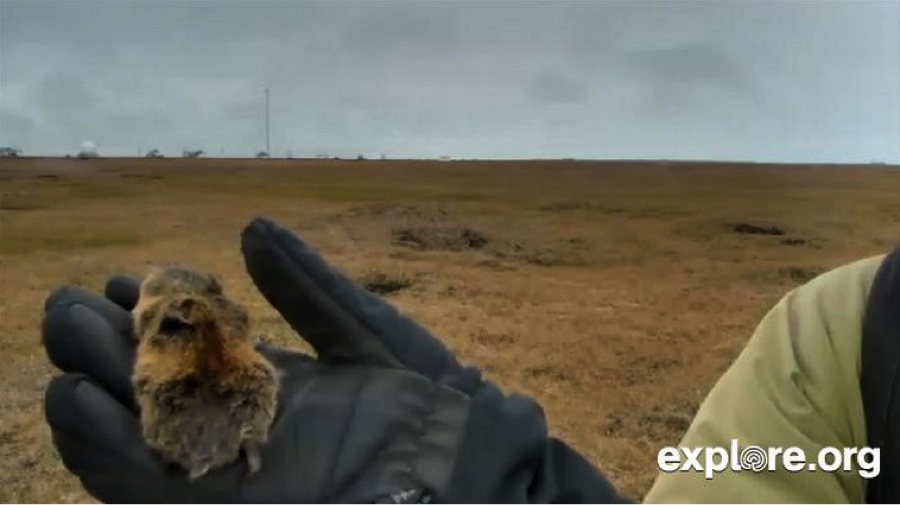 What’s Denver Holt Got for You?!

On a very cold and misty Friday morning (last week, July 18th), Denver Holt of the Owl Research Institute and his research assistant ventured across the Arctic Tundra. (Denver can be seen above holding a brown lemming – keep reading!)

Arriving at the Snowy Owl nest site, which we have been watching in wonder for the last few weeks on the Live Cam, Denver stopped to check on the owlets under the watch of two territorial Snowy Owl parents.

After a few technical difficulties – poor phone signal, and juggling of computers – we managed to get Denver on the phone and in view of the camera. Unfortunately due to a fault with the microphone on the camera we were not able to hear Denver answer questions submitted by our viewers. Answers were captured however, and here is what Denver had to say!:

1.     Can you give us some background into the Snowy Owl study taking place in Barrow, Alaska? I have been studying Snowy Owls and lemmings in Barrow, Alaska for the last 23 years. It is the second longest running Snowy Owl study in the World. The longest running study is 27 years! During the study 250 nests have been studied in detail and over 700 Snowy Owls have been banded. As well as surveying the owls we have also been studying the local lemming populations and their fluctuations over time.

3.     Have you been looking at what the Snowy Owls have been eating? We have been recording prey items bought to the nest sites- 45,000 individual prey have been recorded – over 90% were lemmings, particularly the brown lemming.

Male brown lemmings are thought to drive Snowy owl populations in this region and possibly throughout the Arctic. In other areas it is also the collared lemming. This year, in Barrow, lemming populations seem to be moderate in number. Lemming populations seem to have declined since the spring resulting in many owl nest failures, many chicks have died. Adult Snowy Owls have to feed more on birds to help supplement the surviving chicks’ diet.

4.     How many nests are you studying this year? There are 25 nests in the study area in Barrow this year within 100sq mile area

5.     How many owlets are there on this nest? Presently there are 2 chicks surviving and they seem to be doing well. The nest on the cam started with 8 eggs- 7 hatched, 2 died within the nest and 2 died outside the nest after they reached 3 weeks old and 1 died recently. (When the young chicks die the female often feeds those chicks to the older siblings. Once owls leave the nest rain may be a problem; prolonged rain can result in deaths of chicks. Several bodies studied have shown signs of hypothermia and pneumonia. The mortality rate this year is high across all the nests- 60% or more of the eggs laid and hatched have died. Still, some chicks will live.)

6.     When do the chicks leave the nest? It is typical for the owlets to leave nests at approximately 3 weeks old. Leaving the nest in the order the eggs were laid. In this nest the youngest chicks could have been 1-2 days old and siblings 7-8 days older.

7.     Why do the owlets leave the nest? It’s not unusual for the female owl to move the chicks into a more sheltered area- e.g. behind the mound.

8.  What is the dead bird that we can see on the cam? A Glaucous Gull; Glaucous gulls are large, but occasionally the adults will kill and eat them if there are few lemmings.

9.  Does studying the birds have any negative impacts? Research activities, visiting the nest sites, are timed to 3day intervals. We do not visit when it is raining. We track the chicks’ growth rates and condition. Visiting the nests every day would be too much and visiting over 4 days at a time would be too little. We are aware that we may be disturbing the owls so visits are brief.

10.  How do the parents defend the nest and owlets? Nest defense by males and females appears to vary between pairs and individuals. It sometimes appears to be random behavior. We are not sure if adults dictate where chicks should go. There are several different territorial behaviors that we have noticed:

There is some indication that an aggressive attacking male and an attentive female produce more young than passive pairs.

11.  How do females choose their mates? Snowy Owl males may take around 3 years to become bright white- in a good breeding year with many owls around it has been observed that young spotted/ barred males congregate in bachelor areas and do not breed. Female Snowy Owls may only breed with older whiter males.

12.  Was the PBS film nest one of Denver’s study nests? Yes. The PBS film is based on a nest in the Owl Research Institute (ORI) study site in Barrow. ORI provided most of the information and you can see more here.

13. When will the young start to hunt? The young will stay in the area of the nest for 6-7 weeks. The female parent gradually loses interest in the brood and the male continues to provide food. Some young try to hunt after their first flights. By October they must have acquired some hunting skills to survive.

14. Any final comments Denver? The Snowy Owl is the most well known Arctic bird and could be an indicator of health of the Arctic environment- 1. It is a top of the food chain predator- anything happening in the environment could be reflected in the numbers of Snowy Owls

2. Because of its popularity it can generate interest in active conservation.

Thanks to Denver and his assistant for venturing out in the cold, standing ankle deep in cold water and answering questions with a smile! His team then retreated to a fire on the beach – hot drinks and warm blankets all round. One can only imagine what a campfire on a beach in North Alaska is like!

Special thanks to viewers for the fantastic questions! Keep watching every day on the Snowy Owl Live Cam,