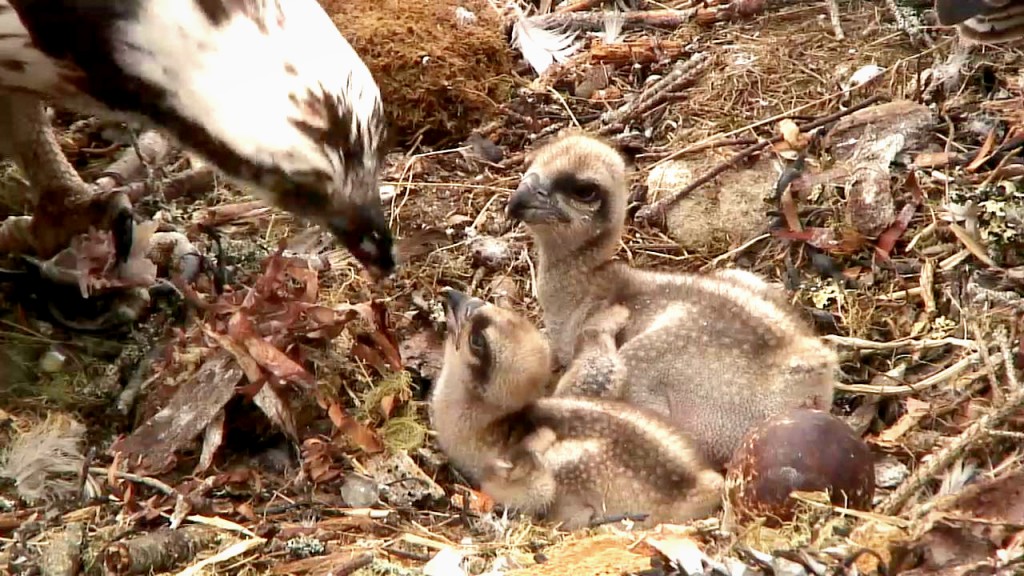 Osprey expert Dr. Paul Spitzer recently stopped by to talk mating, egg incubating, and hatching in a live chat that was fun and engaging. Now that the eggs have hatched on the Osprey Cam, he’s shared with us an essay on the little nestlings.

“Of course osprey chicks hatch very small and helpless, and it is hard to imagine that eight weeks later this will be a flying osprey. Such are the miracles of life.

Hatchlings are covered with a fine, soft, beige down, and are incubated almost constantly by the female. Her nest defense behavior when small young are present often becomes more attentive and aggressive; and she may be reluctant to fly. The male now provisions both her and the young; and she presents small nestlings with appropriately small bits of fish (not regurgitation). During their first week to ten days, nestlings will also beg food from a human visitor to the nest.

At 10 to 12 days all this changes: Nestlings grow a second heavy gray down and take on a rather reptilian appearance. Now they lie still and play dead when you visit the nest, but their eyes–now bright red–remain open, shining vigorously with life.  For the next few weeks, you can see their lifted, bobbing heads from a distance with binoculars or telescope, but they drop them instantly in response to parental alarm calls.

During week three the body feathers and wing feathers start to grow, emerging from nourishing blood-rich keratin sheaths known as “blood quills”. From then on, nestlings look and act more like ospreys with every passing week, and acquire a juvenile photogenic charm. Because there are lengthy intervals between fresh fish deliveries, they have a storage organ at the top of their digestive system called the “crop”. After they are fed, this bulges in the lower neck and upper breast, gradually subsiding as food passes into their stomach.

Hunting demand on the male gradually increases as the young grow, and this is demonstrated by the female’s frequent, repetitive food-begging call. As you will hear, this can be quite an annoying, nagging call, and you may want to turn the volume way down on your computer. Ospreys can be noisy neighbors….

Why don’t the young fall out of the nest? Parents usually maintain a lip on the nest. But there is also tremendous natural selection for careful nest behavior; it must be genetically hard-wired, because there is no learning curve, no second chance. Many years ago, when I was transporting nestlings from the Chesapeake to Gardiners Island nests for brood-size experiments, I found that a very shallow box on the back seat of my car was enough to confine them; with a rim of perhaps four inches—such is the life-saving constraint of this behavior. However, by the time I reached NY the interior of my car appeared as if iced with a big pastry gun. Unfortunately, this was osprey guano; not so delectable as icing. Fortunately most of the guanoed surfaces were vinyl, saving me from my youthful whimsy. This brings us to the question of nest hygiene: the young back up to the nest rim, and squirt long white streams of liquid excrement over it.

This guano is crystalline uric acid, nitrogenous wastes that are far more concentrated than mammalian urine. Osprey nestlings cannot drink, so water conservation is absolutely essential, and all water comes from their fishy food.  They also have a salt excretory gland in their forehead:  Hypersaline solution is ducted to their nostrils, and then evaporates or drips off the bill tip. These two adaptations of avian physiology have enabled seabirds to become abundant around the world; and numerous birds are also successful in desert environments.

Still, as summer comes on, osprey nestlings are living on top of a pedestal in the constant, unrelenting sun, with no chance for a drink. Once they do fledge, they may roost in shade where available, and drink Bay water. They finally get off that exposed nest, but for weeks it may remain the focus for feeding by the adults—the predictable rendezvous known to both generations. Ospreys are good hunters around dawn and dusk, in crepuscular light, so I often see noisy feeding of fledgings very early and late on simmering July days. Watch and listen for this on the Osprey Cam.

That’s the way to use Osprey Cam: Just leave the tab open on your computer. You will hear calls when something interesting is happening. Take a break, hit the tab, watch the action.”