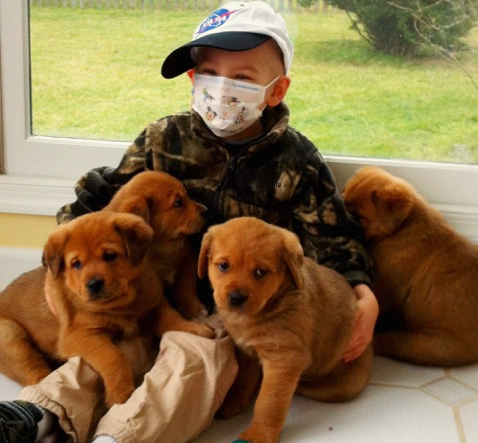 Michael was diagnosed with childhood cancer at age 3.

The love of animals comforted a family battling childhood cancer

We’re sharing your personal stories of overcoming hardships aided by the ever-enduring love from your animal friends. A particularly moving and emotional response came from Jennifer; her son Michael was diagnosed with cancer at a very young age.

Jennifer tells us: “Michael was diagnosed with stage 4 neuroblastoma when he was 3 1/2 years old. His disease did not respond to 5 months of chemotherapy, so he was labeled as refractory and not given much of a chance for survival. He underwent 2 rounds of an experimental therapy of high dose IV radiation which knocked his disease down enough for him to get a bone marrow transplant. He spent 30 days in the hospital for the transplant and then 90 days in quarantine at home.

This was particularly tough on him and his pets, as the animals had to live outside while Michael was quarantined (don’t worry, they had a nice big barn on 3 fenced acres as temporary housing). After the transplant things were looking up and after 6 months of immunotherapy he was declared in remission. Treatment lasted almost 2 years and he recently celebrated 1 year in remission.

Michael loves animals, especially his “siblings”: 2 dogs (Koda and Bella), 1 cat (Schlumpa), and 24 chickens. They helped us all smile through some pretty rough times.

The dogs always seemed to know when he was feeling pretty bad and would stay calm and quiet or lay at the end of his bed. When Michael was in the hospital my husband and I would take turns staying overnight with him.  I don’t know what I would have done without my furry babies on those nights I was home without him.”

Thank you so much for sharing your story. We’re thrilled that Michael is in remission, and loved hearing about how your animal friends alleviated much of the physical and emotion stress your family went through.

Explore.org sent Michael a small gift, a mug with an adorable picture of him and his pup friend snuggling on the couch. Jennifer responded: “Thank you so much for Michael’s gift! The weather has been very cold and snowy here, and Michael loves to play in the snow when he gets home from school. The first thing he wants when he comes inside is hot cocoa. Now he has the perfect mug!