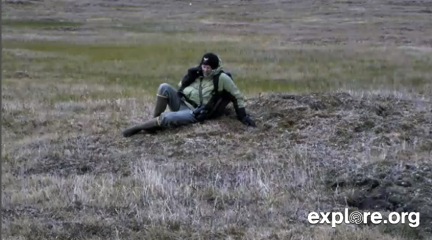 On one of the sunniest days we have seen in Barrow, Alaska Denver Holt of the Owl Research Institute joined us at the Snowy Owl nest site to tell us more about the Nomadic Arctic Ghost. Unfortunately the audio equipment did not work again so we typed answers into the cam comments feed; viewers in the disqus comments and via Twitter submitted questions. In case you missed the Q&A session here is a recap! (This is from the Snowy Owl Live Cam – which is live now here!)

(Caption to photo: Denver sits on the original nest mound, the owlets having departed the mound a couple of weeks ago.)

Here is what Denver had to say:

1.     How many miles does a Snowy Owl approximately travel in its lifetime? I’m afraid I do not have the answer- but they do travel many thousands of miles during migration each season. We do not know individuals throughout the course of their entire lifetime.

Looking out across the salt-water Lagoon Denver points out King Eiders, Yellow-billed and Pacific Loons. He also said that it was a chilly 35F despite the sun shining!

2.     How are the two remaining owlets? I checked the 2 chicks this morning- banded 787 and 788 both appeared healthy. The dead chick found a week ago would have been 789.

3.     How did the chick die? The chick likely died of starvation.

4.     Did Denver see the parents? Yes. The female parent dive-bombed me several times on my walk over to the camera and actually hit me once! The female is currently making sounds that are similar to a food begging call.

We then had to reboot the camera, with a pause in questions Denver moved to sit on the nest mound. When we got back on air Denver explained that a huge folk of King Eider flew close by. Standing up Denver begins to examine the nest mound and finds a number of pellets and a dead female lemming, which he holds up to the camera.

Denver explains, “By examining the contents of the pellets we are able to identify what the owls are eating- pellets contain mainly lemming bones. Birds in the diet are noted by looking at indigestible parts left on the nest mound, such as wings. 45,000 prey items have been recorded during the 23-year study and 90% of the prey items identified have been lemmings, in particular one species- the brown lemming. Some collared lemmings have also been noted. We have been studying lemming populations along side Snowy Owl populations in the area”.

He then paused to explain that he was just watching the male Snowy Owl parent deliver a lemming to one of the two owlets. Denver “these parents are doing a great job at providing for their young”.

6.     Do owls return to the same nest (mound) each year? The same areas are usually occupied but not generally the same mounds.

7.     What information are you gathering from banding the owls? We have banded 750 owls during the Barrow, Alaska, Snowy Owl study. Some birds that have been banded have been identified in wintering grounds further south. One bird banded in Barrow was recaptured in Southern Ontario. 5000 Snowy Owls have been banded in North America. Lots of great information has been discovered, however mainly from mortalities. We know from banding records that the birds travel far and are very much nomadic. Some band records show that owls from Alaska have been turning up in Russia and likewise a Russian banded bird turned up in Barrow.

8.     What information is gathered from satellite tracking? Satellite tracking adds more to the body of knowledge gained from banding records. There is real potential to gain even more if we visit all the sites where the birds are being tracked. It is important to work out why the birds are travelling to and leaving areas. Evaluating why the birds leave the areas could answer questions such as; are there no owls left in the area? Are there few lemmings? Are the owls tracking lemmings across the tundra? Are lemmings higher in population across different areas of the tundra? We have noticed that lemming populations fluctuate over time in Barrow with no real pattern detected. The owls however never miss a high lemming population year, this leads us to ask; are Snowy Owls able to survey vast areas of the tundra quickly to find these lemming populations?

Denver pauses once more to watch a Yellow-billed Loon fly by.

9.     How does the satellite tracking work? As Denver has not worked with tracking himself a volunteer moderator was able to answer on his behalf; “there are different types of tracking devices used on birds. Project SNOWStorm, for example, is using transmitters that are attached like tiny little solar-powered backpacks. They transmit location information through the cellular network.”

10.  How are you able to find the owlets? The chicks are very difficult to locate. Their coloration mimics the greyish lichens on the tundra mounds. The chicks have white down at first and then after 5 days a second down layer appears under the white down, after 2-3 weeks they turn grey and are a sooty grey by the time they leave the nest mound. We call this the silverback stage- the chicks look like mini gorillas bumbling across the tundra.

We then pause again to swing the camera around and admire the female Snowy Owl parent sitting on her favorite shoreline mound. The mound is topped with a wooden platform that over time has become covered in orange lichen. Denver jokes, “the orange really compliments her white feathers”. It is also a great lookout mound over the salt-water lagoon. Denver, “this may be the nicest day all summer”, was referring to the gorgeous sunshine and clear view across the lagoons.

11.  What are the birds on the lagoon behind the Snowy Owl? Pacific Loons, Yellow-billed Loons and King Eiders.

12.  How are the other nests fairing across the study area? 25 nests have been found this season; unfortunately 4 of the 25 have completely failed. The remaining nests have 1-3 chicks left in each nest. Unfortunately most have died, mainly due to starvation. There has been roughly a 70-80% mortality rate in each nest. We have noticed that the owls are switching to birds as prey over lemmings. Birds bought to the nests have included Greater White-fronted Geese, Glaucous Gulls, jaegers and shorebirds. The most impressive kills this year have most definitely been adult Greater White-fronted Geese!

13.  Are the surviving numbers of chicks normal or is it worse this summer? Survival wise this is one of the lowest years in a while. The summer started as one of the better lemming years since 2008, however for reasons unknown the lemming population declined rapidly this year. No big irruption from Barrow, Alaska is expected this year. However some young surviving is better than none.

With the end of the questions Denver goes on to demonstrate the courtship flights made by the male Snowy Owls. He explains, “Courtship flights are complicated. The females have to make all the decisions. The flight by the male is bouncing and undulating and they make the most of showing off their brilliant white feathers”. Denver then goes on to demonstrate the females defense tactics mimicking the broken wing movements “when an intruder approaches a female and her young she will attempt to get their attention and lead them away from the chicks, pretending to have an injured wing, holding it out to her side and moving around in circles”.

At the end of the chat, warming up after the Snowy Owl demonstrations, Denver packed up and waved good-bye to the viewers. It took him a while to hike back to his vehicle and we watched as the adult Snowy Owls flew close by.

Thanks to Denver Holt for all the fantastic information and special thanks to the viewers for the great questions!