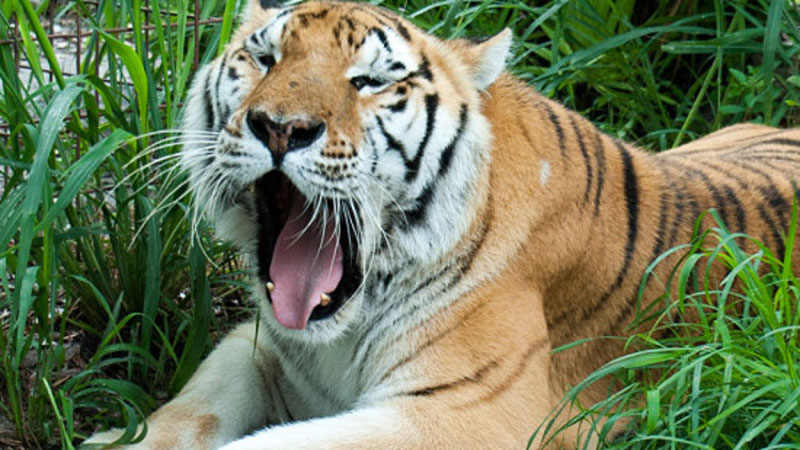 TJ was the youngest of four tigers who were rescued in 2007 from a breeding facility in Center Hill Florida called Savage Kingdom.  Savage Kingdom was run by an ex-circus performer named Robert Baudy who had been famous for his big cat act in the 1950’s.  He boasted that the way you trained a big cat was to chain them to the wall and beat them without mercy until they learned that no matter how much they tried to retaliate, they could never succeed.  Once they were broken they were safe to use in performances.

On May 18th, 2007, Rescuers transported the four to their new home at Big Cat Rescue. They now have spacious grassy enclosures with shrubs and trees, large mountain dens, and pools to cool off in.

Now, TJ lives his best life in a safe space where he is spoiled rotten. He is quite playful and loves to crash through all of the high grasses in his enclosure. TJ has a particular fascination with water and will splash in and out of his pools or the pond, when he is on vacation in the Vacation Rotation enclosure.  He seems to delight in the way the light moves on the surface of splashing water.

Look out for TJ on our Big Cat Rescue cameras here!