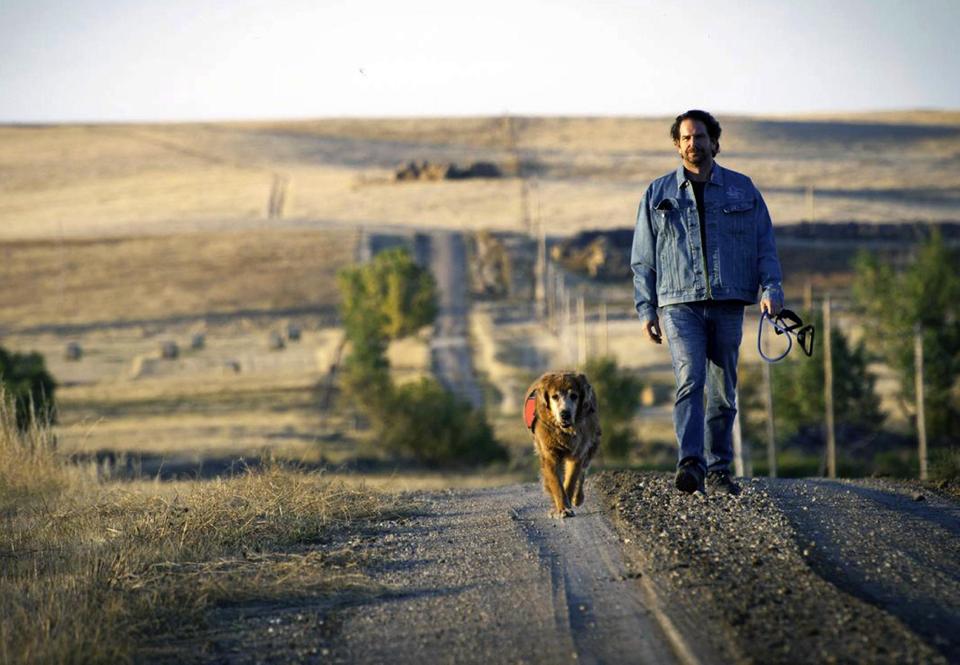 Lucky was 4 in 2001 when he teamed up with Annenberg, scion to a wealthy family known for giving money away.

The 46-year-old Annenberg incorporated Lucky into all his projects. They were on the road more than they were home as they traveled around making documentaries about people who were making a difference.

Lucky became Annenberg’s sidekick and soul mate and would eventually inspire donations to dog-focused causes from the as much as $8 million the philanthropist controls annually.

Whether it was a chef at The White House or coal miners 100 feet underground in West Virginia, Lucky made documentary interviews easy because he made everyone so comfortable. In each small town and big city, the man and dog would make unannounced stops at a retirement home, where Lucky would steal the show.

The workload for both grew with explore.org. Using state-of-the-art cameras, Annenberg brought wildlife (bears and bees and beluga whales) to stunning life for millions of web watchers. He and Lucky traveled to every installation in North America and everywhere they went, Annenberg filmed Lucky interacting with people and places.

The workload for both grew with explore.org. Using state-of-the-art cameras, Annenberg brought wildlife (bears and bees and beluga whales) to stunning life for millions of web watchers. He and Lucky traveled to every installation in North America and everywhere they went, Annenberg filmed Lucky interacting with people and places.

At the Delta Blues Museum in Mississippi, Annenberg cut a harmonica-backed, spontaneous freestyle jazz tribute to Lucky.”It doesn’t matter what color your skin, man or woman, fat or thin. He loves them all, every day. His name is Lucky and he’s my friend.”

In 2010, Annenberg decided to use his Lucky photos and films for a travel journal on Facebook, telling the story of their trips.

Annenberg called the journal Dog Bless You, he said, because several years earlier Lucky had befriended a homeless man in San Francisco. They shared time and a sandwich with the man. As they were leaving, the man said: “Dog bless you.”

The Facebook page was all about Lucky, but it captured the fervor for pets that was growing around the country. “Today we have an audience of 505,000 fans,” said Courtney Johnson, explore.org’s commuanity relations manager.

When an earthquake and tsunami struck Japan in 2011, killing more than 18,000 people, Annenberg used Dog Bless You to send six search dogs.

Passion for the cause on Dog Bless You soared. Dogs cost between $2,000 and $50,000 each, depending on how much training they need, Johnson said.

Annenberg, grandson of the late publisher, ambassador and philanthropist Walter H. Annenberg, is a vice president and director of the grant-making Annenberg Foundation. He gives away up to $8 million a year.

In just three years, he has donated 170 guide dogs, search-and-rescue dogs or service dogs for veterans.

The majority of the dogs funded by Annenberg have been for veterans. Because there are waiting lists at almost every training school and experts say thousands of veterans would benefit from a dog, Annenberg plans to accelerate the dog grant program.

Warrior Canine Connection in Brookeville, Md., is just one of the dog training schools Annenberg uses, but it’s also one of the most unique because dogs are raised for, by and with veterans.

“It’s a good way to say, ‘We are not forgetting about your sacrifices.’ And they (the namesakes) get to spend time with the puppies and get therapy themselves,” Yount said.Trained veterans teach the puppies for the first eight to 12 weeks. Then the dogs go live with volunteers from military or veteran’s organizations. “By the time a dog is fully trained, over 500 vets and service members have been involved in getting it ready,” Yount said.

“Hearing the stories of how these dogs help bring their humans out of the darkness is incredible. In some instances, having the companionship of a dog is what motivates them to keep going — it gives them a purpose and reason to get up in the morning,” said Dog Bless You fan Rachel Nelken of Vancouver, British Columbia.

As Lucky aged and slowed down, the format of Dog Bless You changed, becoming a tribute to every dog. And Lucky had to retire from traveling.

“He was my partner on all these trips,” he said. “It’s not the same. He would open the door and make me look good. People always stopped and petted him. Everyone wanted to keep Lucky, especially the coal miners. Isn’t it interesting that every day was a new day for Lucky? And he just wanted to be petted? It’s been a great ride.”