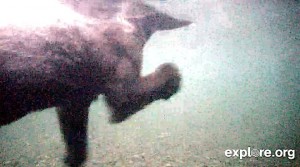 Just When You Thought it Was Safe to Go Back in the Water!

That’s definitely not a salmon! But they are visible right now on the River Watch Cam from Katmai National Park! As the salmon head upstream to the place where they spawned, the bears turn out to feed. The Brooks River is part of the largest Sockeye Salmon run in the world and flows from Lake Brooks to Naknek Lake, a distance of roughly a mile. These bears eat up to 40 Salmon, or as much as 100lbs/100,000 calories of fish per day.

Mounted on the floating bridge over Brooks River, these cams provide an unprecedented view of migrating salmon and bears “snorkeling” for them, both above and below the water.

Brooks Falls is busiest from July through the first week or two of August. See both species on the live #BearCam now!

(Thanks to cam watcher Cloud for the pics!)