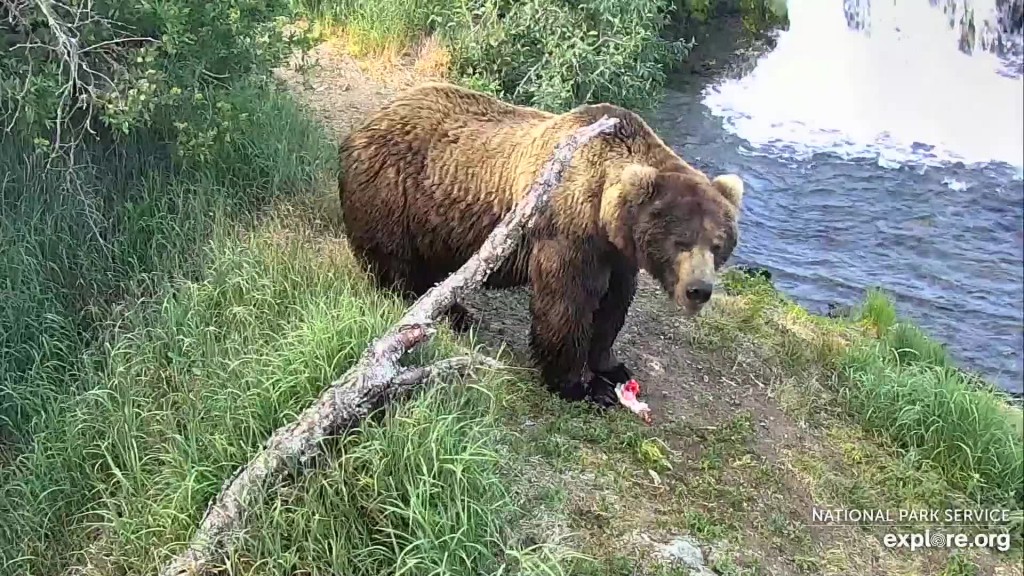 Hi and welcome back to our weekly Bear Cam blog. We’re excited that the new season has begun and looking forward to giving you some highlights and info. We will be publishing this blog every week with a review of the previous weeks Bear Cam highlights. Brought to you by your bear cam Mods, LaniH and GABear.

During the off season, the Bearcam community was saddened by the passing of 3 of our long time friends.  Juergen, Dicky Neely and Kenairiver will be dearly missed on our comment board. Their friendship and contributions will be remembered for a long time to come.  We are dedicating this first weekly review to their memories. We miss you guys!

The Brooks Falls, Riffles, Underwater and Dumpling cams went live on June 21.  We are anxiously awaiting the debut of the Lower River cams soon. All the bears seen so far are looking very healthy and big for having just emerged recently from hibernation!  The salmon have been plentiful already with many, many jumping at the falls by the end of this week.  The picture below is salmon staging just below the bridge. This weeks highlight video can be viewed here. 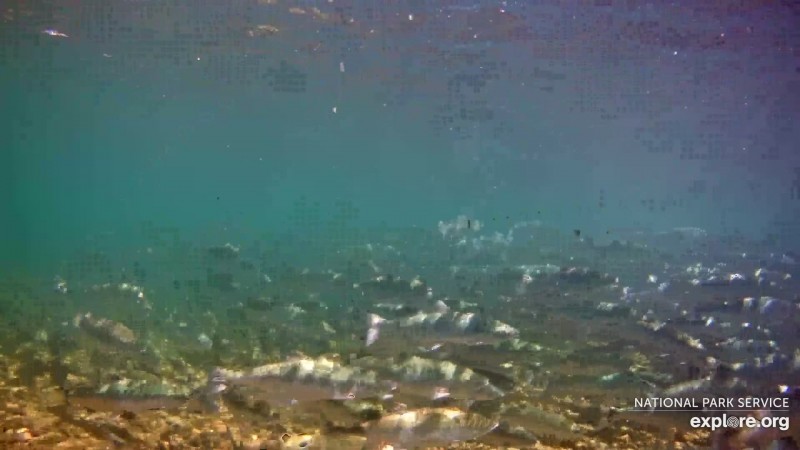 Our first bear seen on the cams was 128 Grazer.  She returned with no cubs this season and has been catching and eating fish in the Riffles and at the Falls regularly.  It’s mating season, so in between fishing sessions, she seems to get a lot of exercise running away from males (especially dominant male 856) who are following her around.

When 128 Grazer did get a chance to fish without the attention of 856 or other male bears, she found herself dealing with a pirating Sub Adult a couple of times.  The young bear was very persistent! 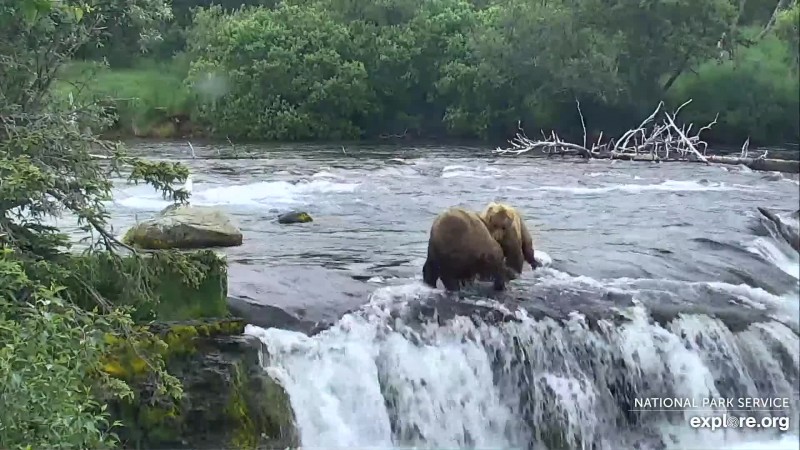 128 Grazer was also spotted on cam catching not one but TWO salmon at once in the riffles. She sure is making the most of the all you can eat salmon buffet! Watch the video here. More can be learned about 128 Grazer in the first of the Bears of Brooks River series which can be watched here. 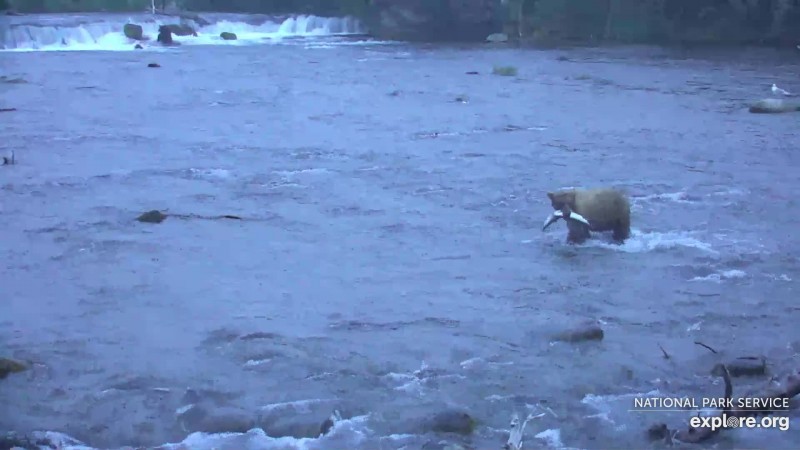 747 returned the Brooks River looking like he was almost ready for the Fat Bear Contest!  It’s hard to imagine how much larger he will become during this summer. 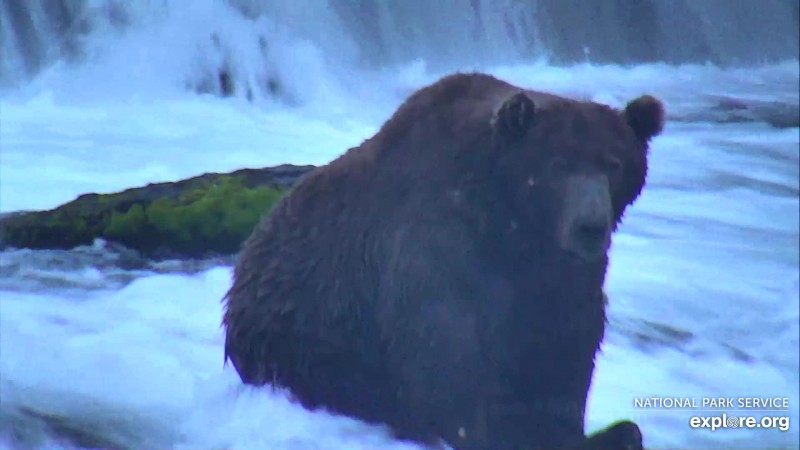 435 Holly is back as a single female this season.  We presume she emancipated her 2 cubs, but have had no confirmed sightings of them on the cam.  She’s been seen on the Falls cams several times. 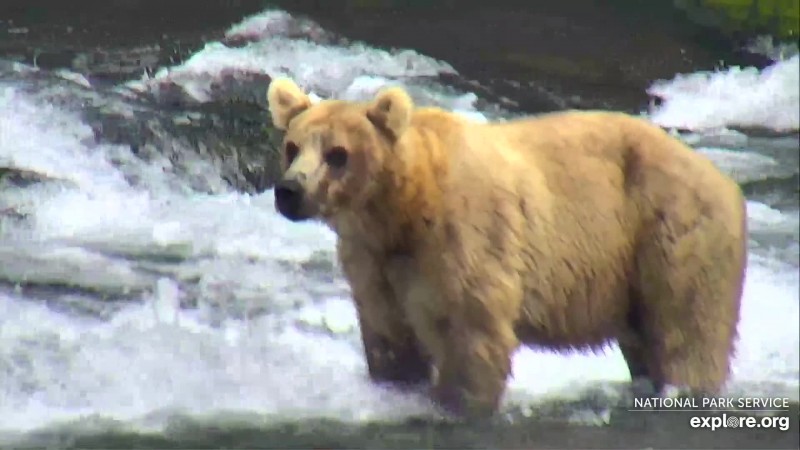 856 has returned this year and has let us and all the other bears know that he is still the most dominant bear at the falls.  He’s been seen clearing other adults and sub adults from the Falls so that he can choose the best fishing spot. He’s been pursuing 128 Grazer and shown displeasure towards any other males who get too close to her.  We have twice seen him get into an altercation or fight with an unknown bear. He was clearly the “winner” of these small battles. In one, the unknown bear backed away in a submissive posture, and in the other 856 turned his back on the unknown bear indicating he was unconcerned about aggression from the opponent and finished with him. 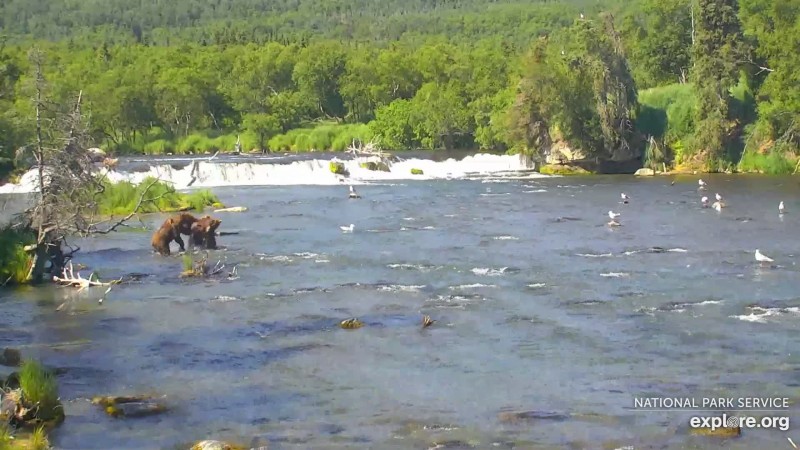 After a long week of waiting and hundreds of questions about whether he’d been seen yet from his fans, 503 finally made an appearance on the Falls cam Wednesday night.  503 proved to be a very entertaining bear to watch last season with his playfulness and ability to get along with any number of bears. It will be interesting to follow him this season to see if, as he matures, his behavior undergoes any changes. 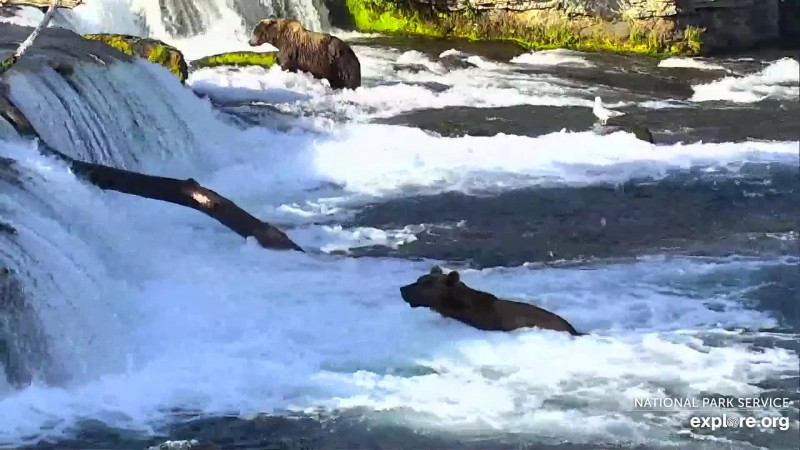 Viewers enjoyed watching a young sub adult try its hand at fishing the lip this week.  The young bear was persistent and finally successful in catching a number of fish. We were surprised at how well it did.  The crowd could almost be heard cheering when the fish were caught. 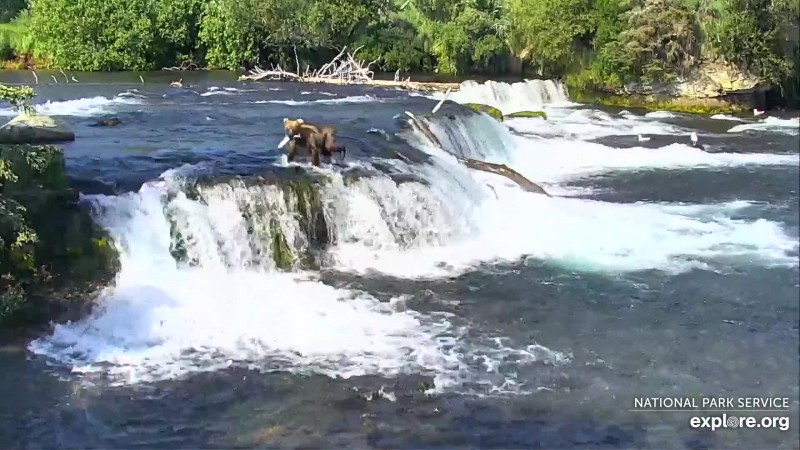 Not to be outdone, 634 Popeye also spent a lot of time fishing from the lip.  This is something we hadn’t seen often on the cams. He was not as proficient as our regular lip fishers, but he did have success.  Mostly the viewers held their breath fearing that his large bulk would lean a bit too far over the edge and he’d plunge into the jacuzzi!  Popeye didn’t seem concerned and did not fall off! 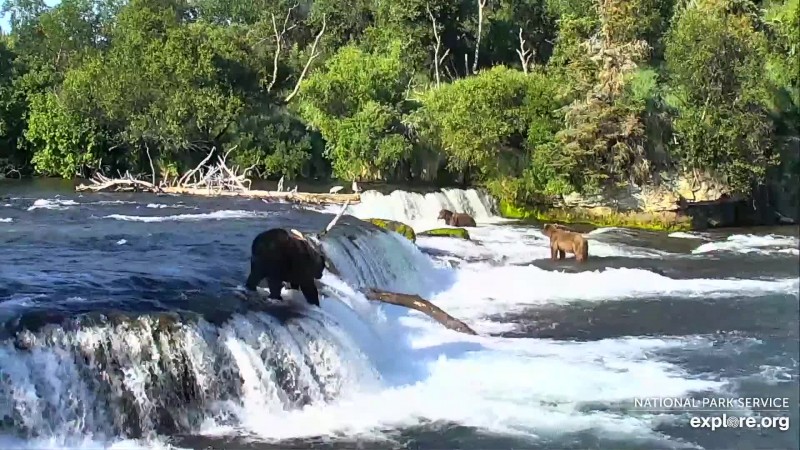 634 Popeye also gave bearcam viewers a good look at his cowboy walk, as he walked away from the falls low cam. 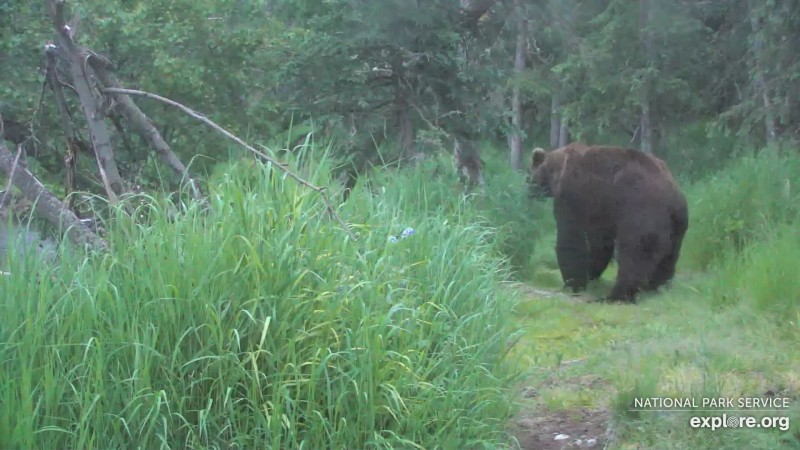 Our first sow with spring cubs, cubs of the year (COY) were spotted by Katmai Conservancy Ranger Naomi. The sow is 171,  confirmed by Explore Naturalist Mike Fitz. 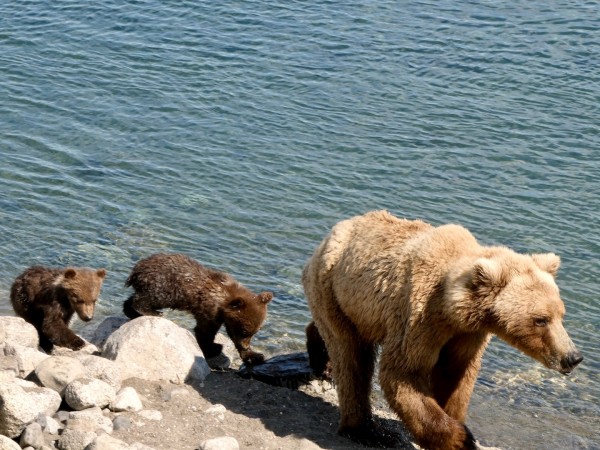 Two sows with cubs were also spotted in the riffles. 482 Brett and her three yearlings crossed the river right near the riffles platform. One of her cubs is almost as white as a polar bear 🙂 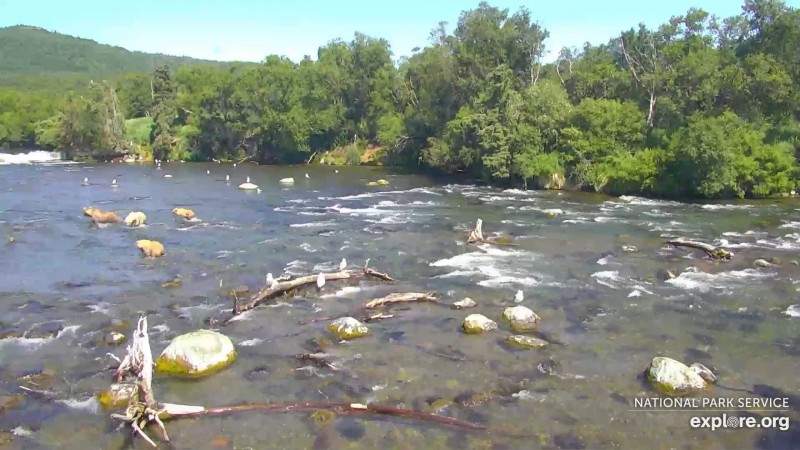 132 and her yearling were also seen near the riffles on two different occasions. Her yearling has grown into quite a large sized cub 🙂 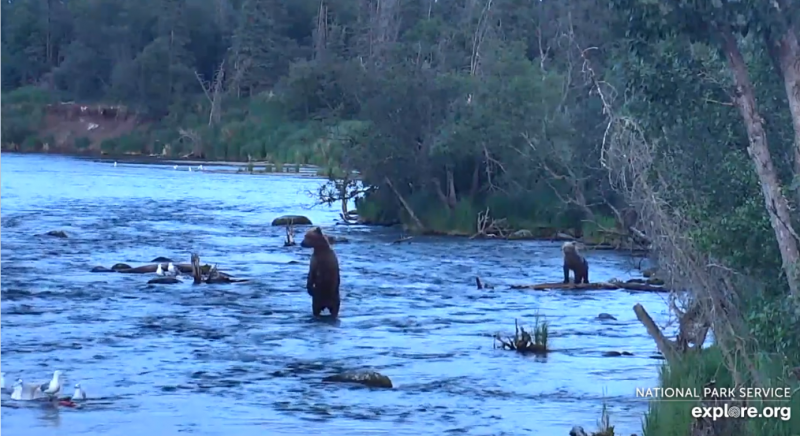 Bear 402 and her three yearlings were seen late at night on June 27 in the riffles.  402 did have 4 spring cubs last year but lost one sometime between fall of last year and spring of this year. 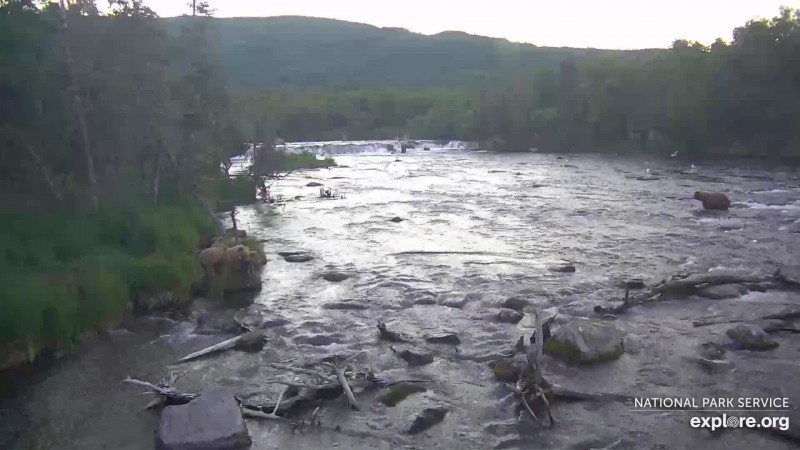 While we do not yet have views from the Lower River cams, we do know that there are bears there!  The Underwater cam has provided several great views of bears swimming by in the pursuit of fish. The bear pictured below could be 435 Holly. 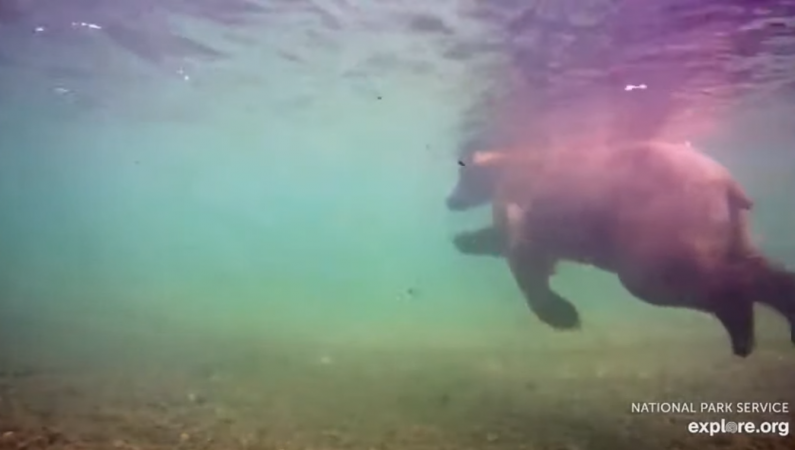 Viewers think that 89 Backpack was seen this week as well.  He wasn’t around long before being chased away by 747. Hopefully we will get a better view of him soon. 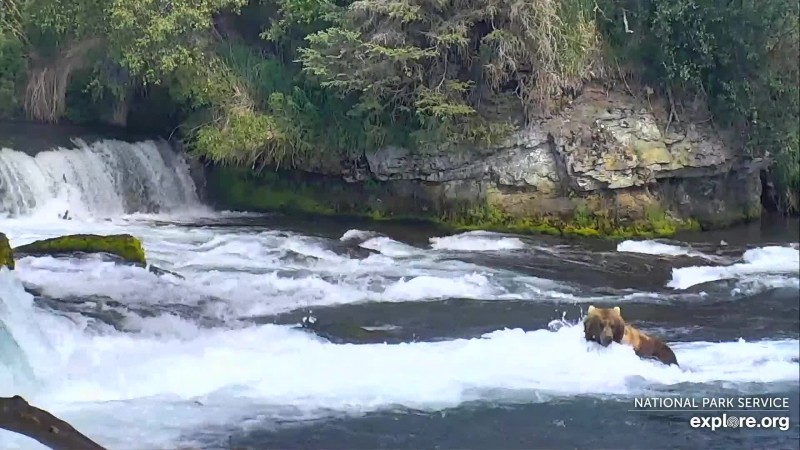 We had our first Live Chat of the season this week with Mike Fitz and Katmai Conservancy Rangers Naomi and John giving us an overview of the upcoming season and answering some questions.  You can view it here

To keep up with which bears are returning to the river, bookmark this link for the Katmai Bearcams wiki page for bears seen in 2019.  Scroll the list for who’s been around and click the links for more information and pics.

To check on the scheduled chats and PBP’s check this link on a regular basis.

And lastly (yes we made you wait all the way to the end) 480 Otis has not yet shown himself on the cams as of the time we went to press!  🙂 Keep an eye on the comments below the cams on explore.org and also on the Featured Comment for news and tracking of 480 Otis!