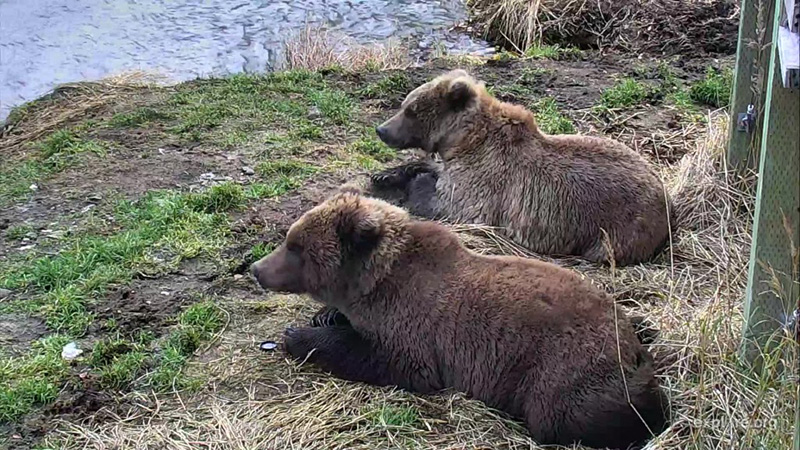 This week, on the Dumpling Mountain Cam, we were treated to a sight the likes of which I don’t think we’ve seen before on that cam:  Close up views of bears on the mountain!  We have seen them much farther from the cam on occasion, like small brown dots in the distance sometimes, but this time four bears really let us get up close and personal for quite a long time.  Thanks to fast action from Explore, a cam op was able to get us even better views. Video can be seen here. These bears seemed to be foraging in the light snow cover for berries, but they also seemed to be playing around some in the snow.  It was a great sight.  We aren’t sure which bears these were.  Many thought it was possibly 854 Divot and her yearling cubs. It sure was a highlight for us!  Former Katmai Ranger Mike Fitz gave us his thoughts, along with a video of bears on Dumpling Mountain in the spring, in this blog. 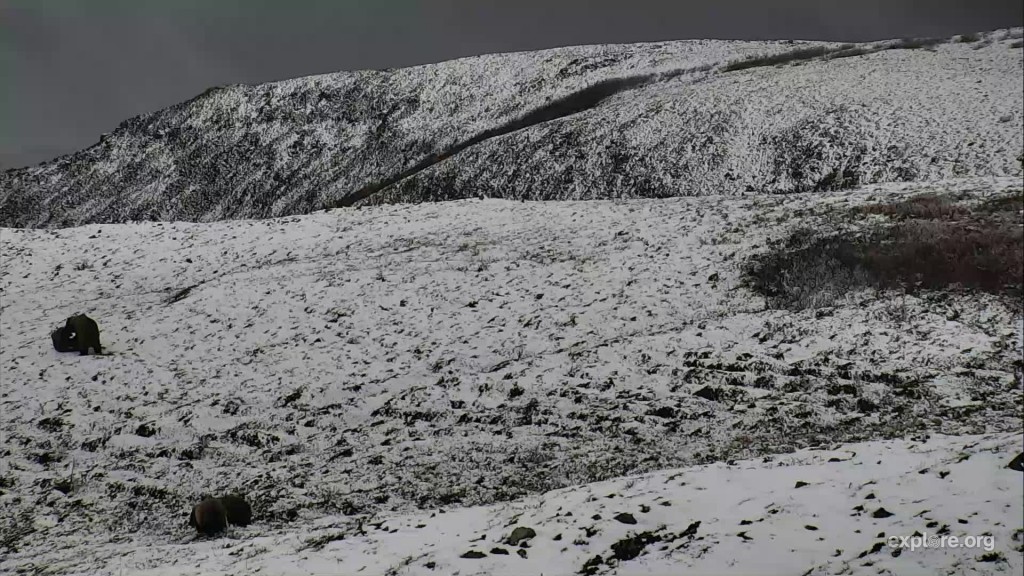 Sow with 4 cubs on Dumpling Mountain 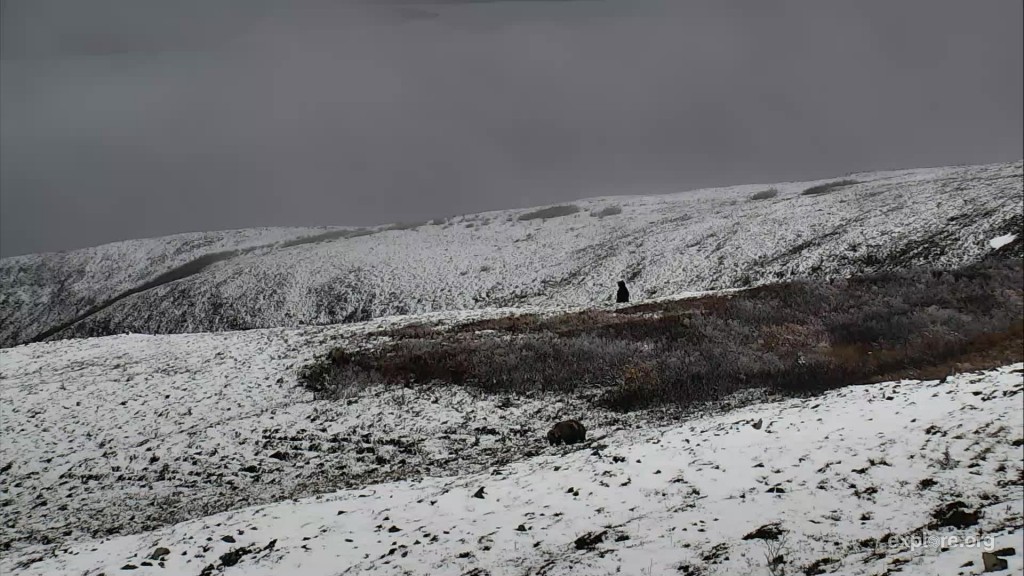 Once again, we have had some great views of Bald Eagles this week.  We’ve seen two adults, possibly mates, several times.  Sometimes they are just sitting on a favorite tree branch scanning the river near the island for scraps.  Sometimes they are on the island picking around in the mud and grasses to get the scraps.  We’ve also seen them on the far side of the falls on the bank waiting for a bear to finish his fish in the water near the shore.  They were then able to hop out on a rock and grab scraps from the river. 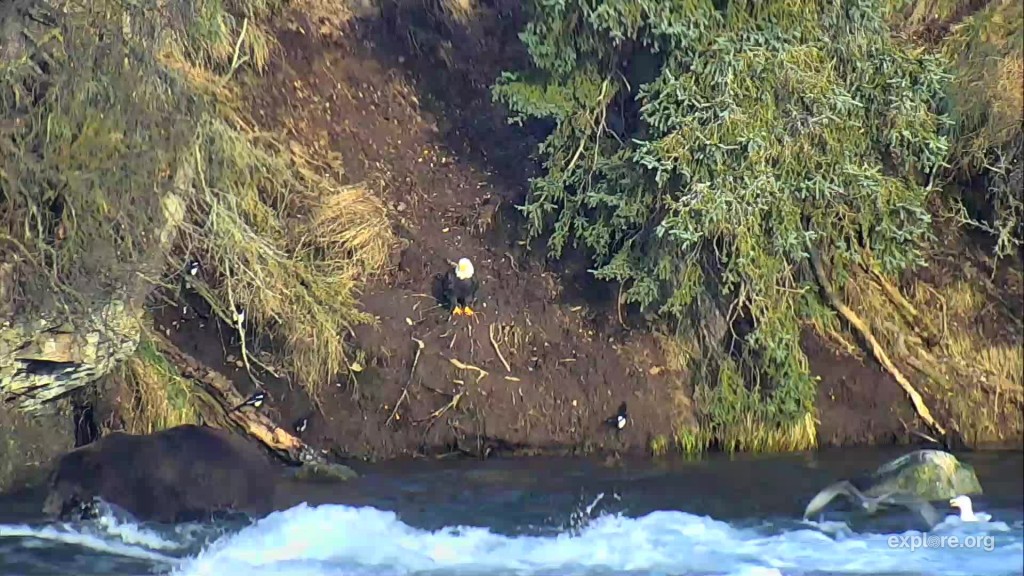 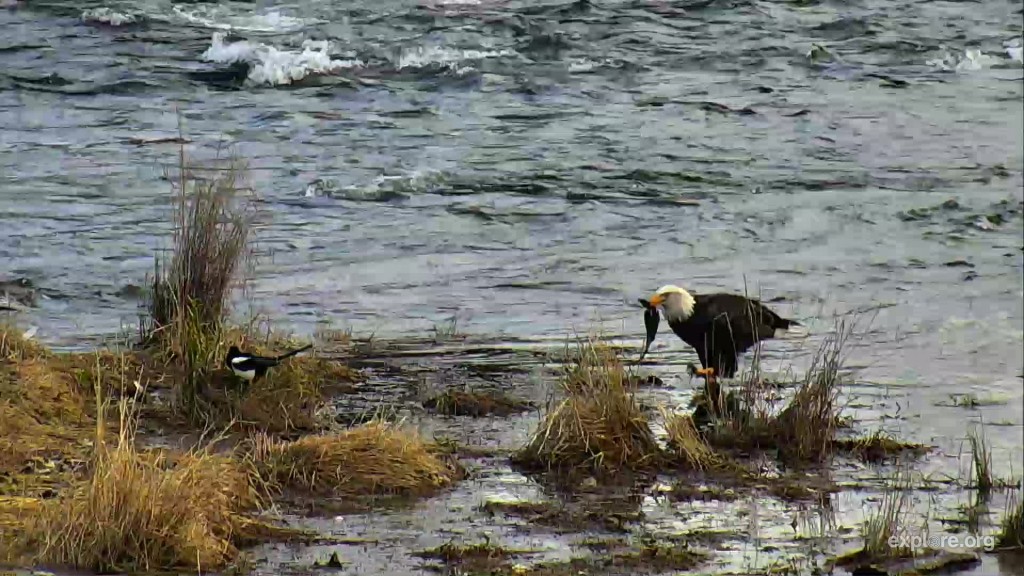 eagle eating salmon on the island

A Magpie provided some comic relief one afternoon.  It, too, was waiting for a bear to finish a fish on the island and hopefully leave it some scraps.  There were several Magpies and this one apparently thought there was one too many.  Taking matters into his own hands…..or rather, Feet, he moved into just the right position and very deliberately delivered a sideways kick surely worthy of a black belt!!    Magpies are thought to be one of the most intelligent bird species and this one sure did appear to use some quick calculations in order to get into the perfect spot and perfect distance for this maneuver.

We are still fortunate to be seeing bears at or near the falls area.  Bear 474 has spent several days sitting in the office still able to catch some fish.  Often he takes his catch either up over the falls or up the far bank to eat.  Being a safety conscious bear, he always backs down from the top of the falls or the top of the steep path to get back into the river. 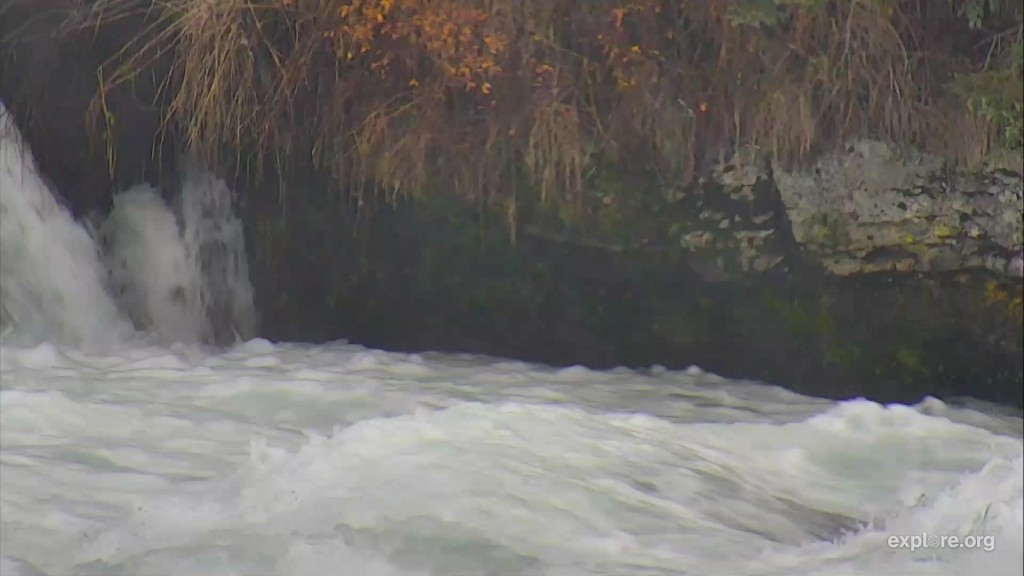 474 starting to back down falls 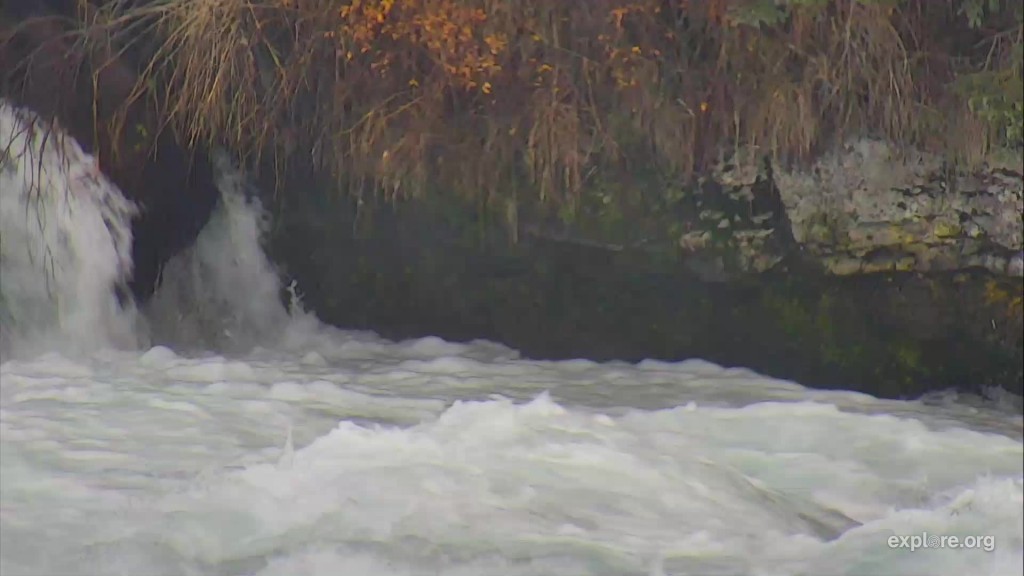 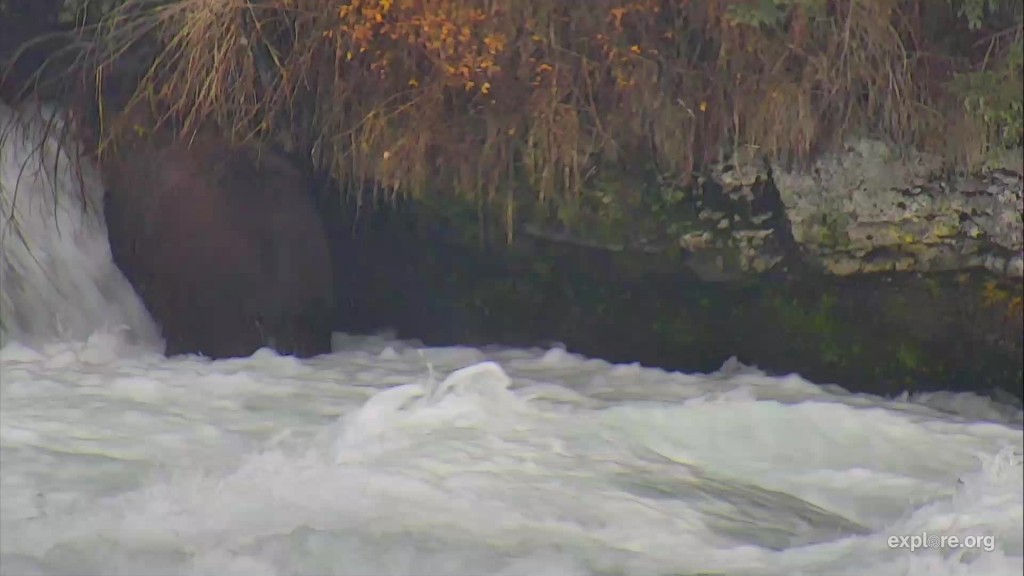 284 and her cubs spent some time at the falls.  We got some great views of her two large, fluffy looking yearlings lounging on the ground in front of the viewing platform, while 284 was looking for fish video can be seen here. 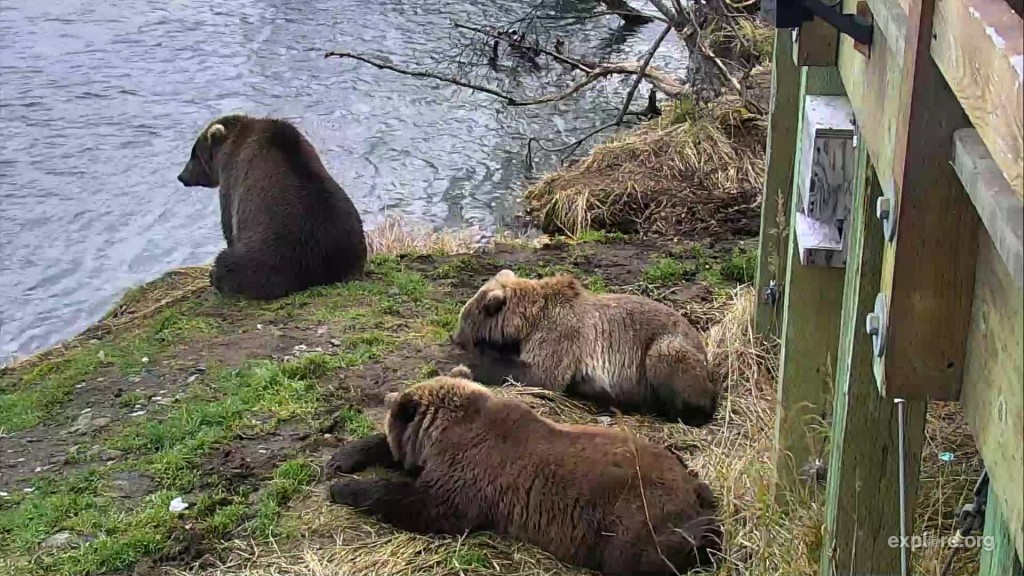 284 and cubs by platform

They were also spotted out on the island looking for and eating salmon scraps video can be seen here. You can really see how big her yearling cubs have gotten. 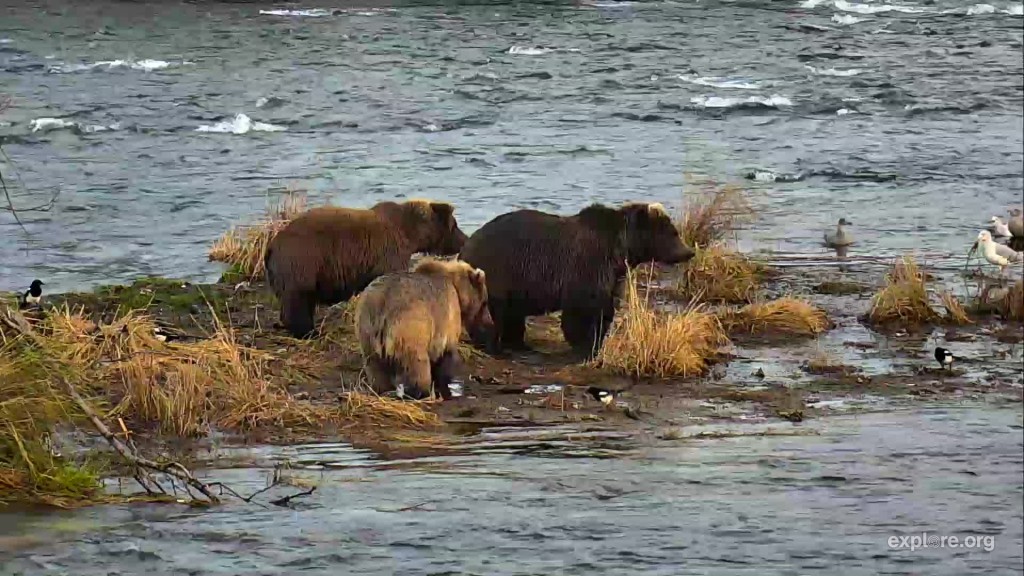 Wednesday  marked our first view of heavy snow falling on the River.  It looked like a blizzard for a brief time with the windy conditions adding to the beauty.  It didn’t last long or accumulate much, but it was a great view. Video can be seen here. 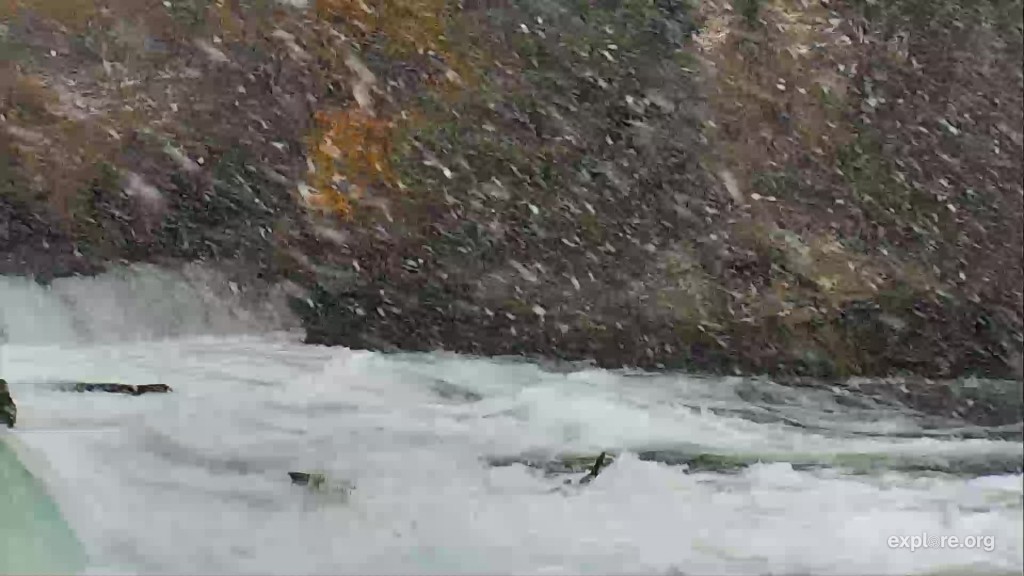 Snowing at Brooks Falls, bear 474 is barely visible in the office

We also were treated to a glimpse of 719 this week, she was seen on the far bank very briefly near her adopted brother 503. She is looking more like her Mama 435 Holly everyday. 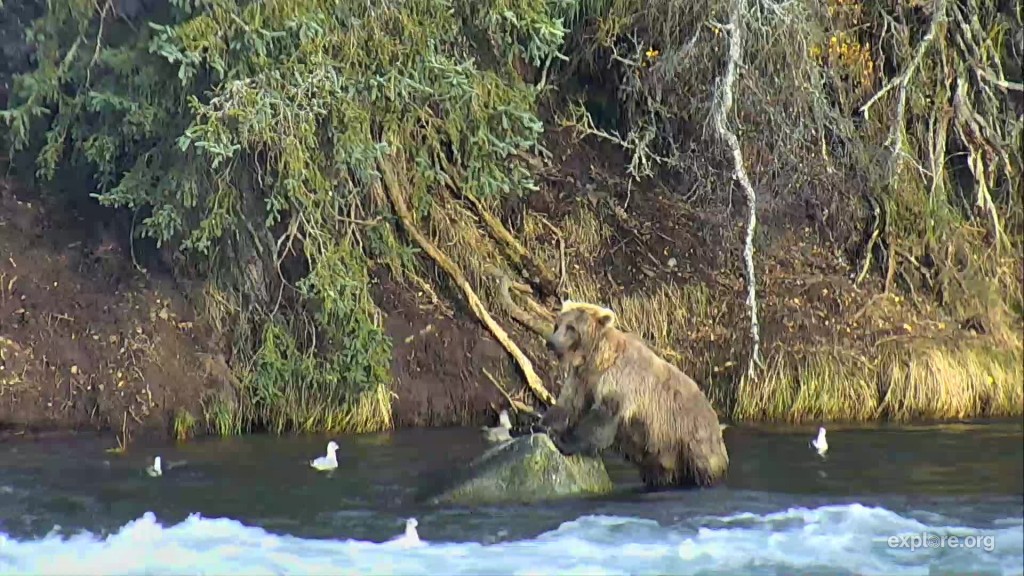