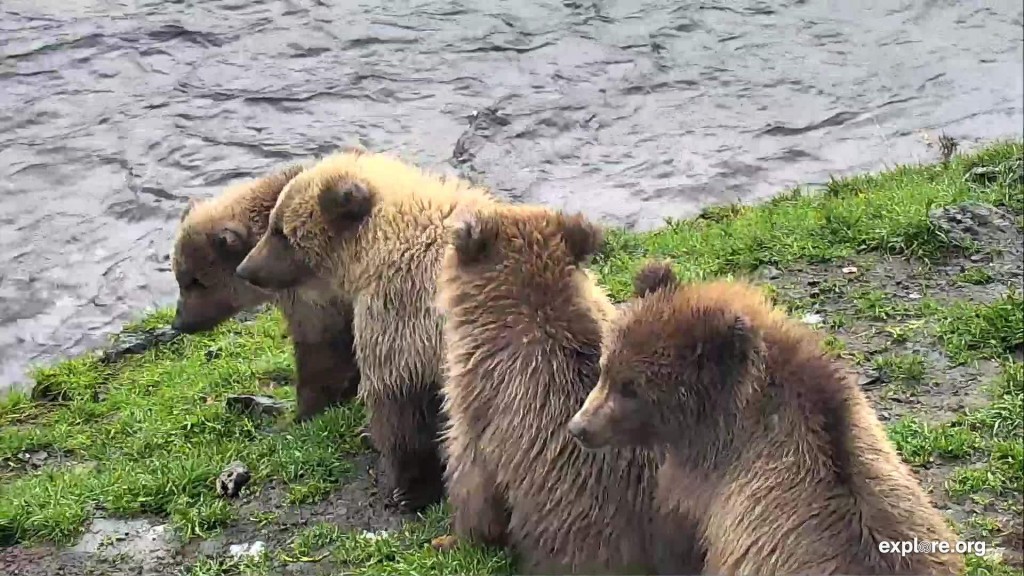 Fat Bear Week came to an end on Tuesday.  And the winner is…..

“The Fattest Bear of 2018 is… 409 Beadnose!
Her radiant rolls were deemed by #FatBearWeek voters to be this year’s most fabulous flab. What does she win for all this hard work? Stronger chances of living through the winter.” 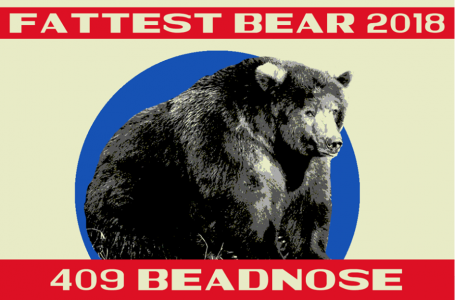 Thanks to everyone who organized, participated, had fun, campaigned and voted in this years Fat Bear Week! Explore fellow, Mike Fitz reports that while 747 conceded defeat, he vows to eat even more salmon next year!  🙂

Mike Fitz hosted a special Fat Bear Tuesday Live Chat.  Ranger Russ joined him remotely. They discussed why fat is so important to brown bears.  You can watch it here. 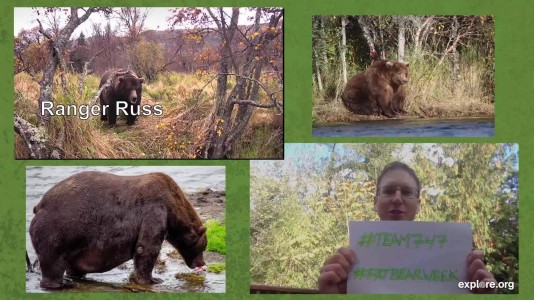 Mike also did a live (remote) Play by Play on Fat Bear Tuesday that can be seen here.  During this live broadcast, 480 Otis was seen taking a nap half in the water, half on an island on the Lower River.  When he woke up, he demonstrated just how efficient it was to nap near your food source by catching several salmon in 10 or 15 minutes while only moving a very short distance from his napping spot.  480 has been seen most days either on the Lower River or up at the Falls. 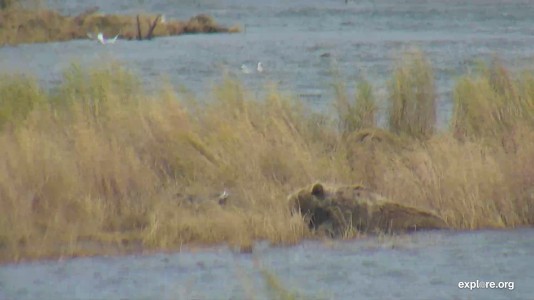 480 and the explore cam ops were in the right place at the right time last week.  480 finally obliged and allowed himself to be darted with a biopsy dart to obtain a tissue sample for the ongoing Genetic research project at Katmai. 480 emerged from the water just long enough for the dart to get its sample and drop off before he went back in the water. Ranger Michael retrieved the dart and we’ve been told it was a successful effort to obtain a sample.  You can learn more about the Genetic project here.  You can also view a live chat with Ranger Michael about it here. 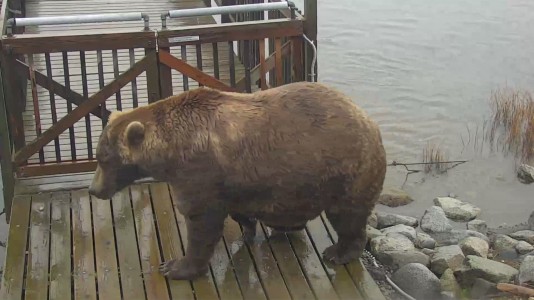 We welcomed former Katmai Ranger Roy Wood (now at Shenandoah National Park) back for a remote visit this past week as he joined Mike Fitz in a live chat about denning and hibernation.  Lots of great info and some comparisons between our brown bears and the black bears that inhabit Ranger Roy’s park. You can view the chat here. 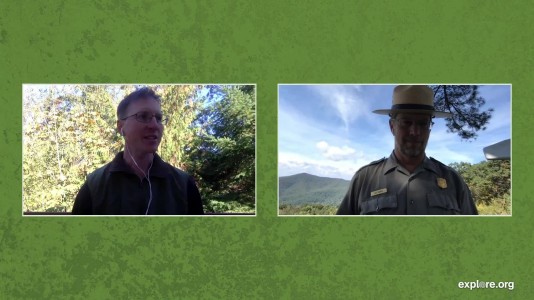 708 Amelia was seen at the falls this week.  She is looking quite fat and posed on a rock (aka Backpack’s rock) near the falls. She’s gotten so rotund she almost doesn’t fit. 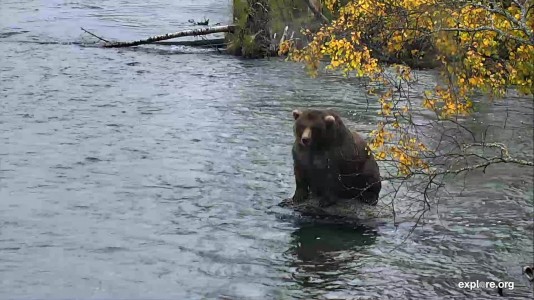 402 and her 4 cubs were seen several times this week.  402 demonstrated her diving skills in the Jacuzzi while the cubs waited on the bank in front of the falls viewing platform.  During another visit to the falls, 402 charged at and slapped at 32 Chunk who approached the shore where the cubs were sitting a little closer than 402 liked. 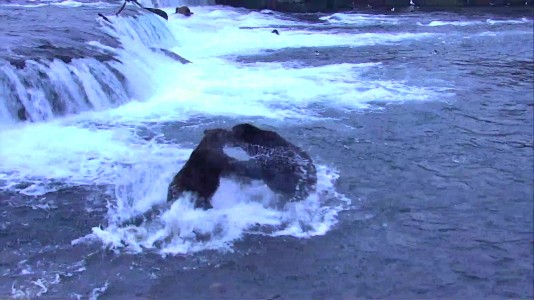 402 protects her cubs from 32 Chunk Snapshot by kcanada

Her curious cubs were seen fishing a dead gull from the edge of the river and spent some time learning that perhaps gulls have just too many feathers to bother trying to eat.  One of the cubs also spent a bit of time investigating and chewing on the housing surrounding the Brooks Falls Low cam. 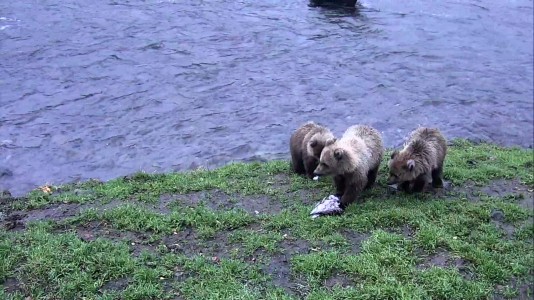 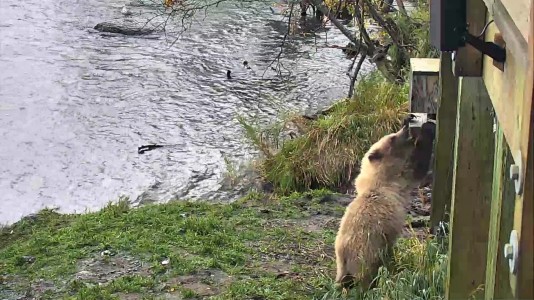 402’s coy also got a diving lesson by watching 402 diving into the Jacuzzi, all 4 cubs seemed to watch her closely. 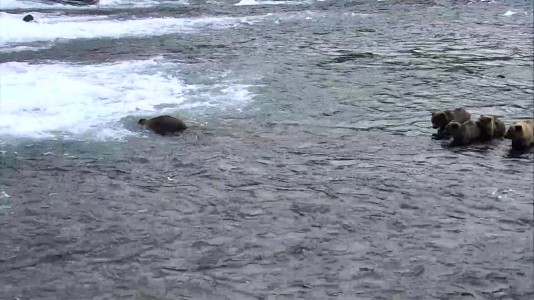 503 continued to be prominent at the falls.  One day he was seen managing to get 68 to “play” a little with him. Other days he was feeling less playful and became defensive when a sub adult attempted to steal his fish.  The sub adult was backed off and ended up on his back in the river. 503 was also seen having a spat with another sub adult this week. Perhaps hyperphagia (the state of never feeling full and having a constant urge to eat) is making him more concerned with fishing and eating than with playing? 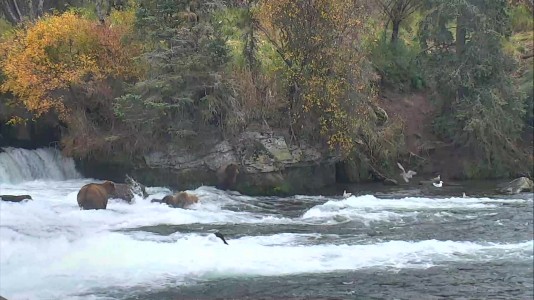 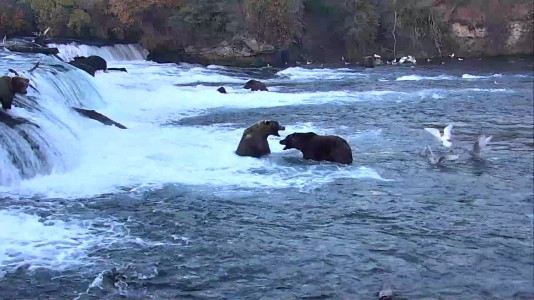 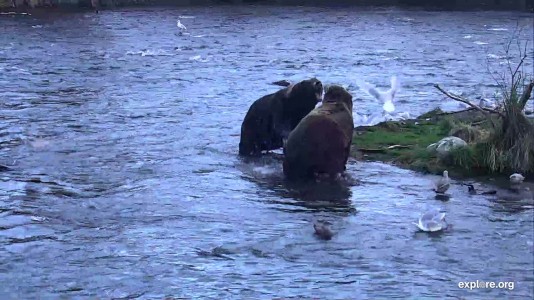 68 has words with 32 Chunk Snapshot by LaniH 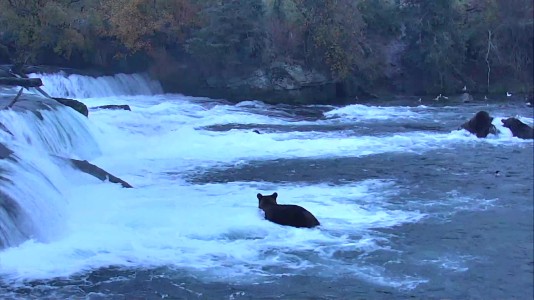 There was also some playing going on this past week. 503 did play with both 151 Walker, a bear thought to be 602, 68, and another subadult. 132 was also seen on the lower river playing with her coy. 503 plays with 68 Snapshot by Larinor 132 and coy play Snapshot by Corrwest

There were some great views of bear 879 fishing in the lower river near the bridge.  We don’t often get close up views of this bear and really enjoyed seeing him in a better view. We also got a good look at him and 480 Otis at the falls. 480 Otis hadn’t  been seen at the falls in a couple of weeks. 879 eating near the floating bridge Snapshot by kcanada 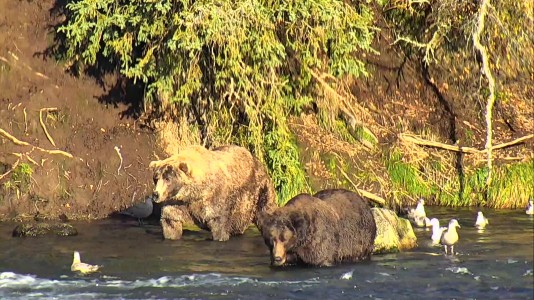 On two different occasions this week, we saw bears on the Dumpling Mountain Cam.  The bears appeared to be foraging for berries on the ground during most of the time they were visible on cam.  While we had good views of them, they were not close enough or clear enough to ID either of the bears. It’s also possible, according to Mike Fitz, that these bears might not be bears that we have seen on the river, but other bears that are passing through the area prior to moving to denning areas. Mike Fitz had this to say about what they could be grazing on:

“What’s that bear on Dumpling Mountain doing? Looks like it is grazing on berries. Some bears may forgo salmon for periods of time to fatten up on berries instead. High in sugar, berries are one of the most important late summer/early fall foods for brown bears.  In the open tundra habitat on Dumpling, the two most abundant berry producing species are crowberry (Empetrum nigrum) and blueberry (Vaccinium uliginosum).” another bear grazing on Dumpling Mtn Snapshot by Larinor We also got a good look at an unknown bear with a nose scar and a scar on the left shoulder. Early this year Mike Fitz talked about a bear seen at the falls with an scarred nose, could this be the same bear we’ve seen in the riffles and falls? unknown bear with scar on nose Snapshot by Keli