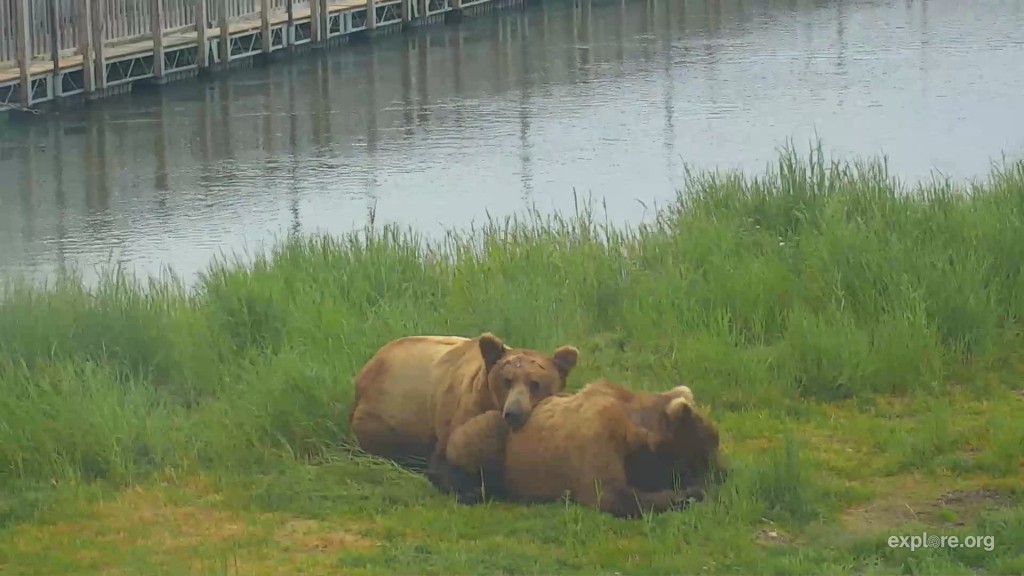 Welcome back to a new year of Bear Cam Viewing! Your chat mods LaniH and GABear hope to continue to bring you weekly updates on the Live Cam action again this season, with a review of the bear activities, pics and videos from the previous week.

This year we welcome Ranger Russ and Ranger Andrew, Katmai National Park Rangers, who will be providing info in comments, live chats, and play-by-play action chats.  Their first live chat of the season was a super one! Lots of great info on plans for the season! You can watch it here: 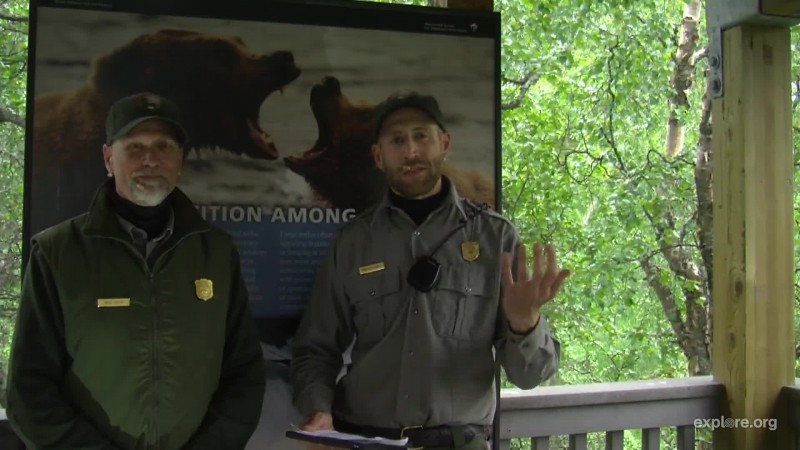 Another addition to the team working to bring information to the live cam viewers this season is Mike Fitz.  A former Katmai Ranger, Mike has a fellowship with explore.org and will be interacting with the viewers in the comments, through live chats and with blogs here at explore.org  Mike has been popping into comments below the cams, and is featuring posts with notes about bears seen and answers to viewer questions. He did a couple of pre-season live chats. You can watch them here and here.

Ranger Andrew and Mike Fitz did a live chat from Dumpling Mountain on 6/25.  You can watch it here: 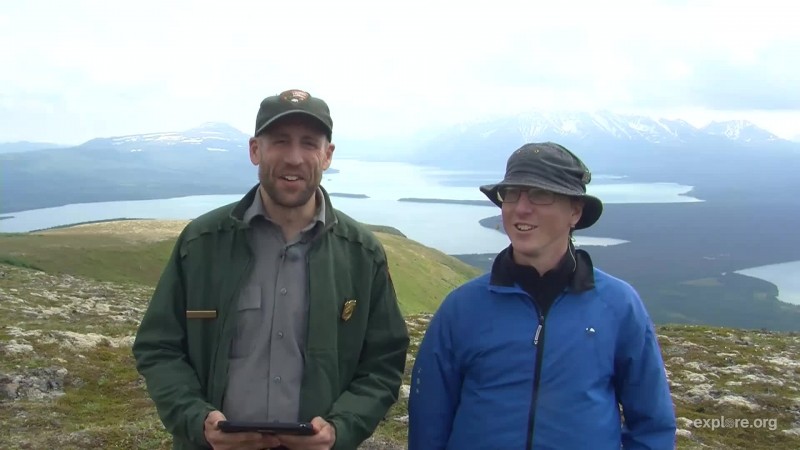 Mike and Rangers Russ and Andrew have provided viewers a way of getting questions to them anytime.They will try to answer these questions in the comments, in a live chat or in a blog.  Submit your questions here.

Currently Mike and the Rangers plan to answer questions in writing in the comments below the live cams on Wednesdays and Fridays.  Check the calendar feature to the left of the comments for the time schedule for these sessions.

We have a second (new) cam at Brooks Falls.  It is a lower view of the area in front of the platform and of the river and can pan either direction from there.  We’ll get some great up close and personal views of the bears when this cam is in use. 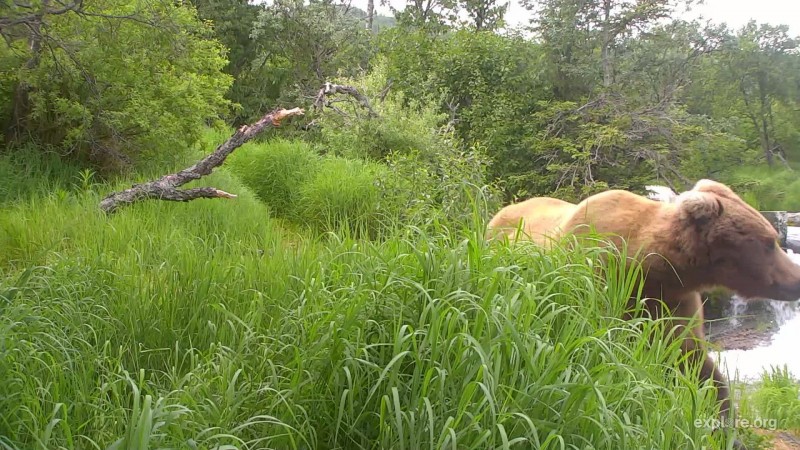 The Underwater cam has been relocated to a different place under the floating bridge on Lower River.  It is in a deeper area of the river and hopefully we’ll see even more fish and bears there. 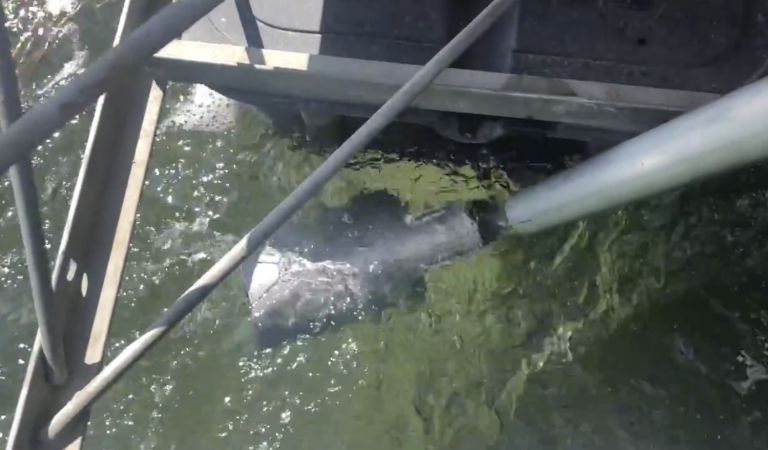 And now onto the important stuff:  What bears have been seen this season??

Male bears: 51 Diver jr, 151 Walker, 274 Overflow, 503, 634 Popeye, 747, 755 Scare D Bear, 856.  On the female side: 128 Grazer, who was first seen by the Rangers with her 2.5 year old cubs, but now is being seen without them, apparently having emancipated them this season.  409 Beadnose is also a single bear this season having emancipated her two cubs. 435 Holly has been observed with her two yearlings. 708 Amelia seems to have finally decided her cubs – that were with her for a 3rd summer last year and were nearly as large as her then – were ready to be on their own this year and she has been seen alone. 854 Divot has added her 3 cubs to the ranks of sub adults spending their first year on their own as well. We’ve seen a number of sub adults too.  Only positive ID from the cam views has been 409’s recently emancipated pair. 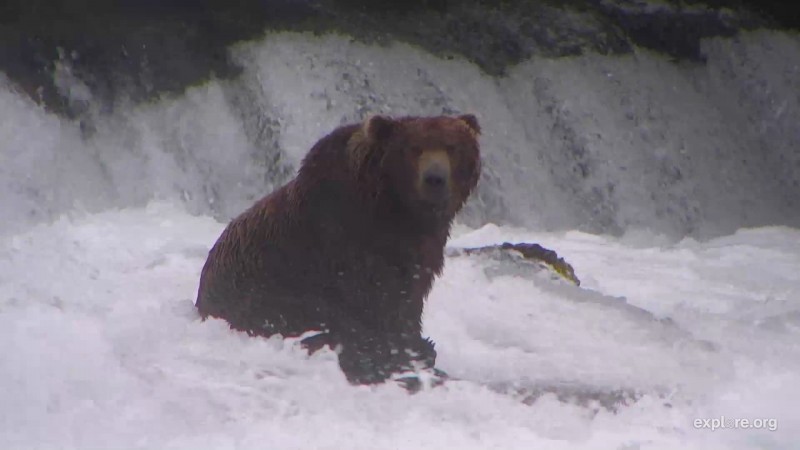 747 sitting at the falls 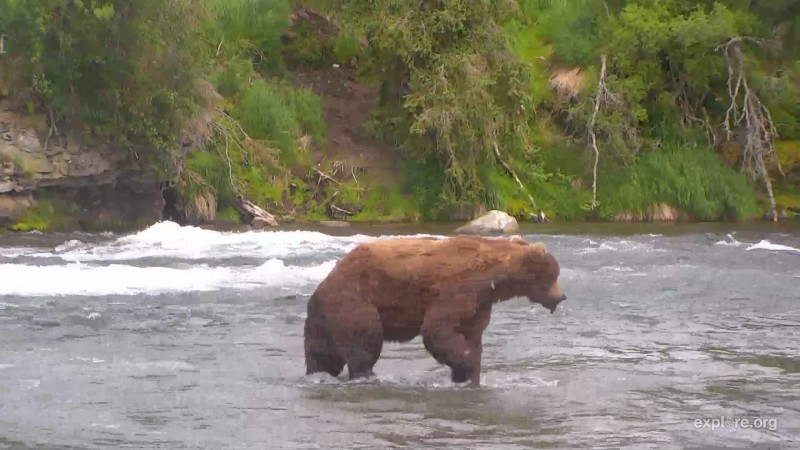 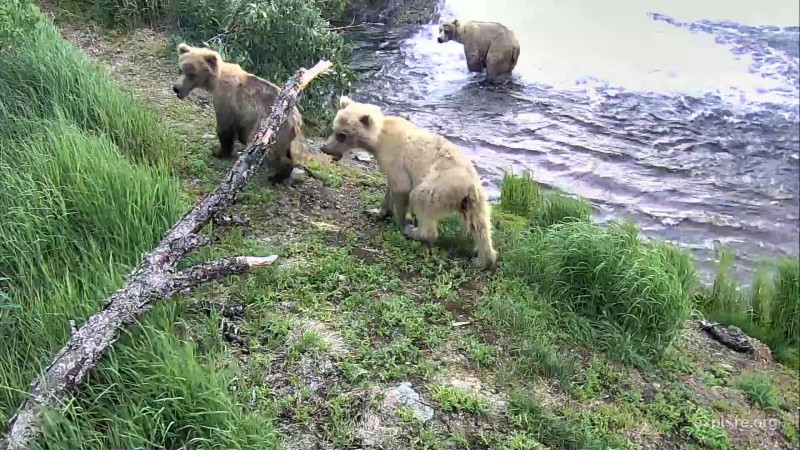 We’ve had a number of informative blogs sent our way courtesy of Mike Fitz:

The Mouth of Brooks River

What to Look for 2018 the Bear Hierarchy

We have viewed a number of exciting things on the bearcams this past week. 747 asserted his dominance over 151 Walker. 747 was in the Jacuzzi and saw 151 Walker trying to make his way across the lip of the falls. 747 left the J approached the falls and sniffed at 151. He then quickly climbed the fish ladder and chased him all the way across the falls and up the river bank. 274 Overflow also asserted his dominance over 503, video of that can be seen here. 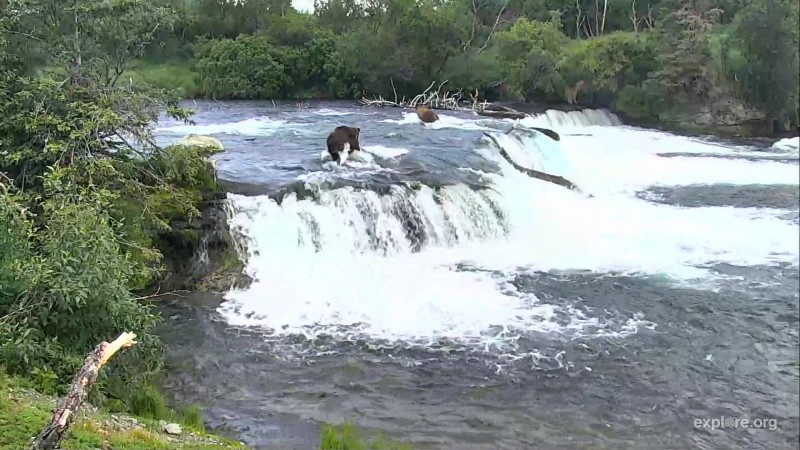 One hierarchy question from last season we were looking forward to being answered was how dominant is 856 going to be? After last season’s fall from the top spot where 856 was displaced by 32 Chunk and 747, viewers wondered if he could regain the top spot. If this past weeks encounter with 747 is any indication, 856 may indeed be the top bear again. Video can be seen here. Bearcam Fellow Mike Fitz had this to say about the encounter:

The bear hierarchy is always in a state of flux, but we’ve seen some indications of how it will shake out this summer. On the evening of June 26, the cams captured two of Brooks River’s biggest bears in a confrontation. With his head up and ears forward, 856 directly approaches 747. We see 747 begin to back away, but he then turns to face 856. After some prolonged posturing, 856 moves away and begins to fish. 747 eventually tries to take the opportunity to leave the scene, only to find 856 pursuing him into the meadow near the cam. 856’s behavior in this situation reveals he’s willing to confront other bears at the river. He may, once again, become the river’s most dominant bear. 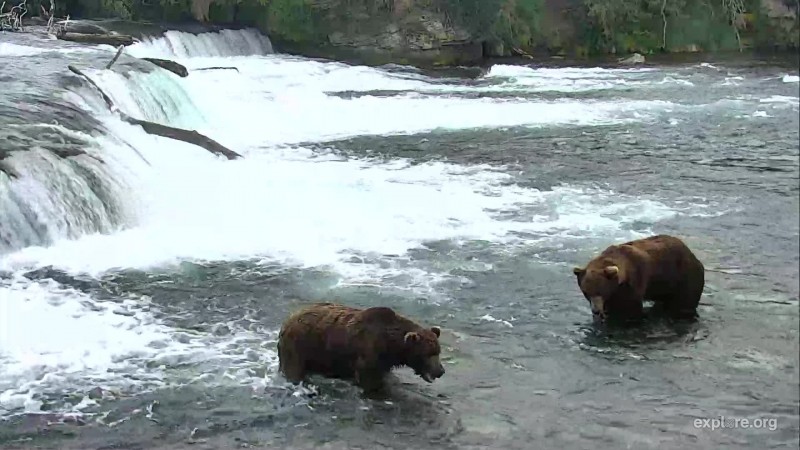 Along with the dominance displays we saw courting behavior this week. 51 Diver Jr was seen following 409 Beadnose down the riffles and off the far bank. Ranger Jeanne said in chat that she (409 Beadnose) wasn’t the least bit interested and evaded him by doing a circle near the riffles platform and doubling back up river. Video of the encounter can be seen here. 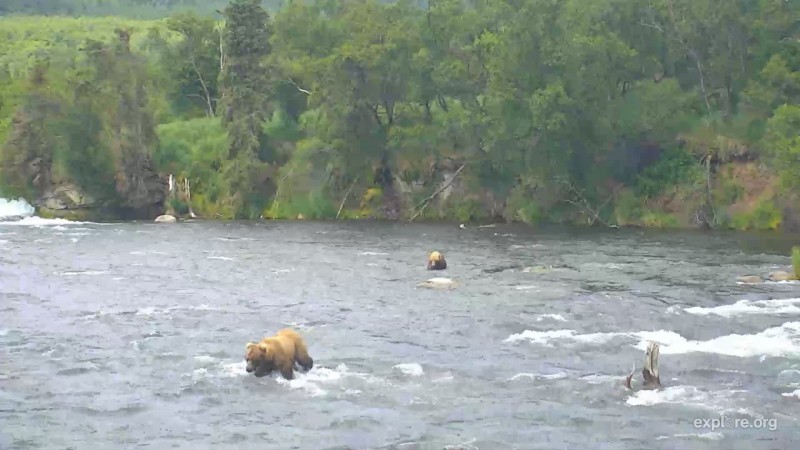 151 Walker also tried his hand at courting 409 Beadnose not long after her encounter with 51 Diver Jr. 151 approached her and 409 Beadnose swatted at him and he turned and backed away and left the river near the riffles platform. Video of this encounter can be seen here. 151 Walker again attempted to follow 409 Beadnose who was coming down the far path, 151 Walker strolled by her on his way to the far pool. As 409 was almost down the hill 151 chased her back up the hill. Video can be seen here.

On Thursday, bear cam viewers were able to observe courting activity between 151 Walker and 708 Amelia. We have seen courting and mating, as well as pursuits of females by males as seen on the video’s above. Viewers have also seen males look as though they are “guarding” their chosen mate from other males as in the two photos below. 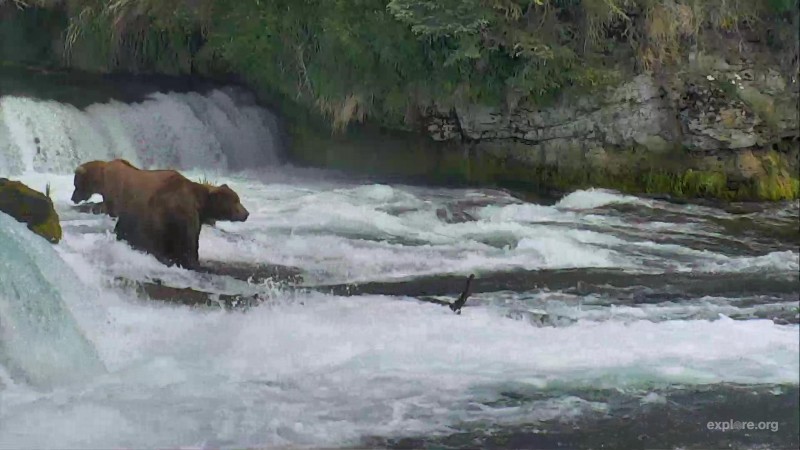 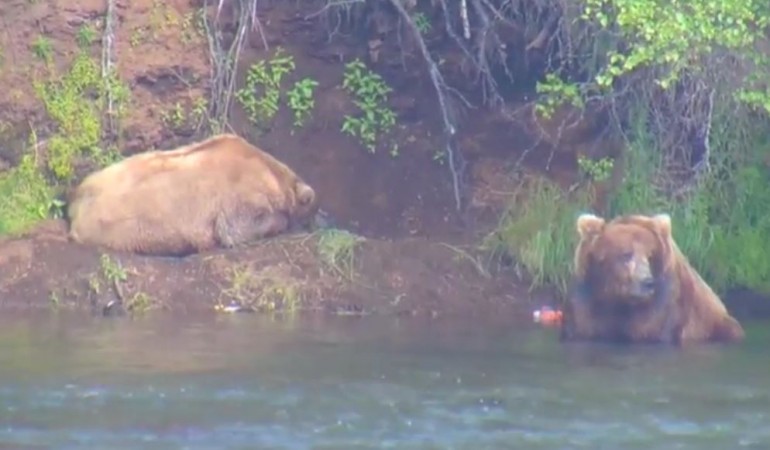 Thursday however, we saw these two bears spend a significant amount of time resting together – we could even call it “cuddling”. Here is what Bearcam Fellow Mike Fitz said about the behavior:

I’ve seen male-female pairs play for a brief time after copulation, but it’s not something that happens all the time. Sometimes, after copulating, bears simply part ways. It seems to be a choice individual bears make depending on their mood and the mood of their partner.

Video by Martina can be viewed here. 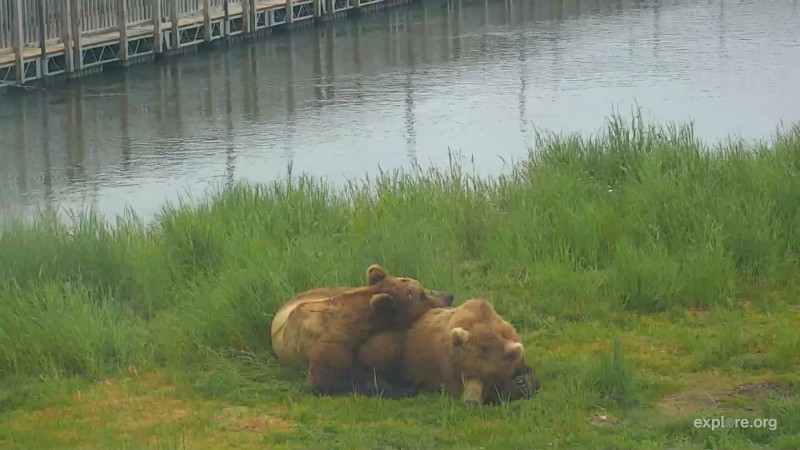 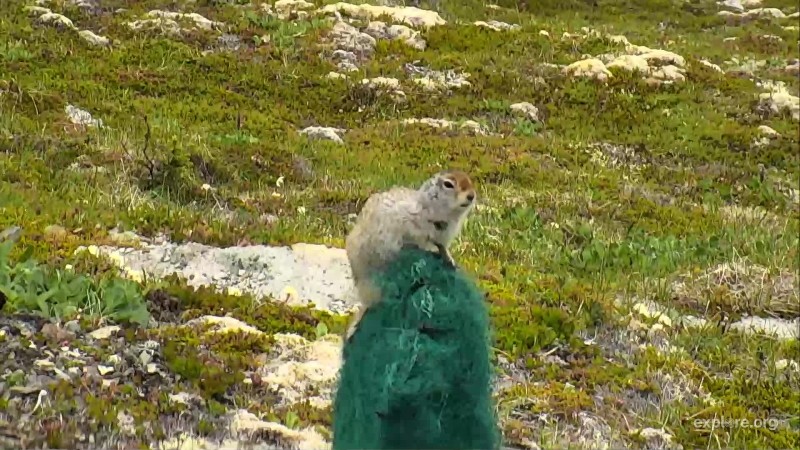 The Sockeye Salmon are slowly starting to arrive in the Brooks River so we’re looking forward to seeing many more bears arriving in the area in the coming weeks. You can read about the life cycle of the Salmon that return to the Brooks River here. Stay tuned to the bearcams and we’ll see you next week with another update!