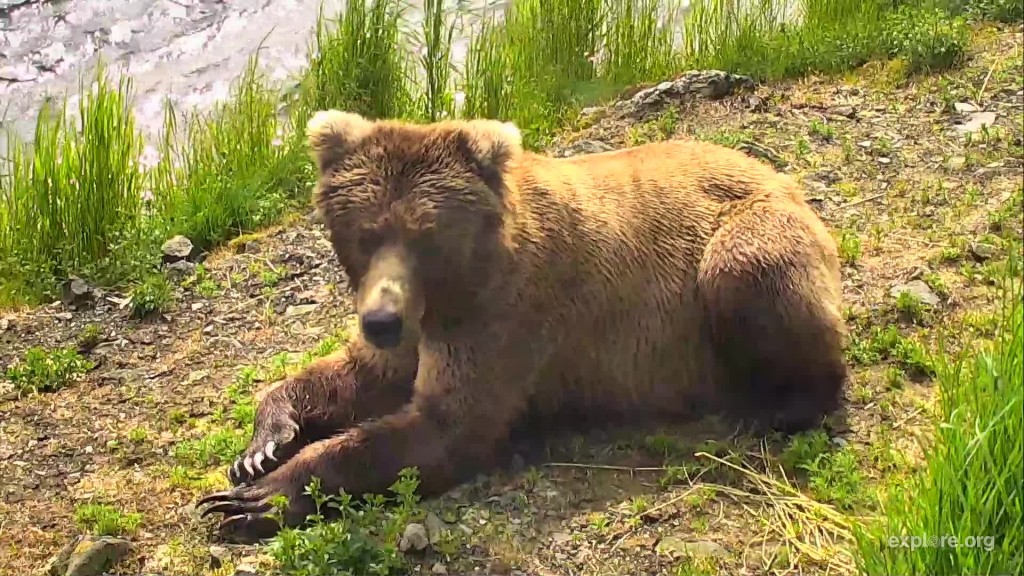 What an event filled week we’ve had on the Bear Cams!!  So many bears seen, so many salmon, great live chats and play by plays and chats in the comments from Mike and the Rangers!  It’s impossible to detail all of it here, but we’ll try to get to a lot of it!

The salmon run has started and you may see plenty of salmon jumping up in the Jacuzzi attempting to scale the falls. If you tune in to watch and there are a lot of salmon jumping and very few or no bears at the falls you may wonder why this is. It may seem strange but it’s because during times when the river is full of salmon it takes less time for the bears to get full, which means less time at the falls in front of the cams. 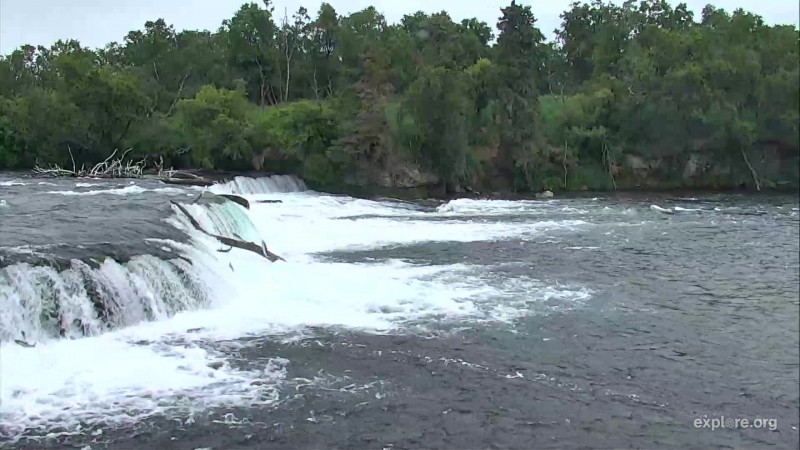 salmon jumping the falls with no bears in sight

Just after we published last week, two of the perennial favorites made their first appearance on the cams!  480 Otis sauntered into view, as did 410!! At 29 years old, 410 is the oldest known bear regularly seen at Brooks.  At about 22 years old, Otis is also one of the older bears. 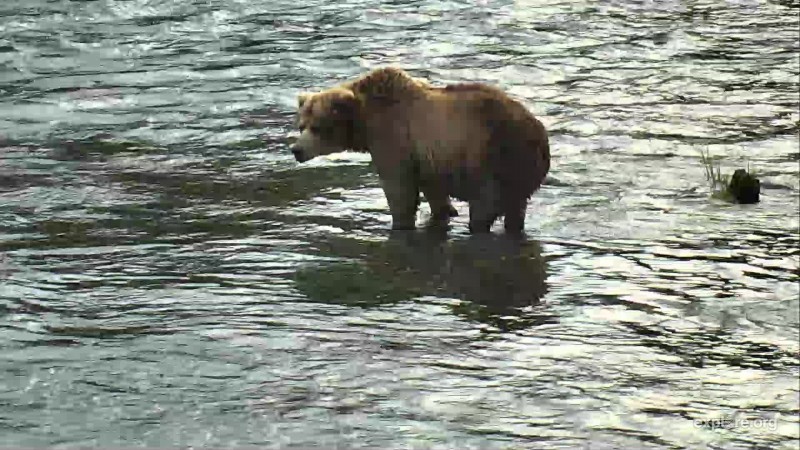 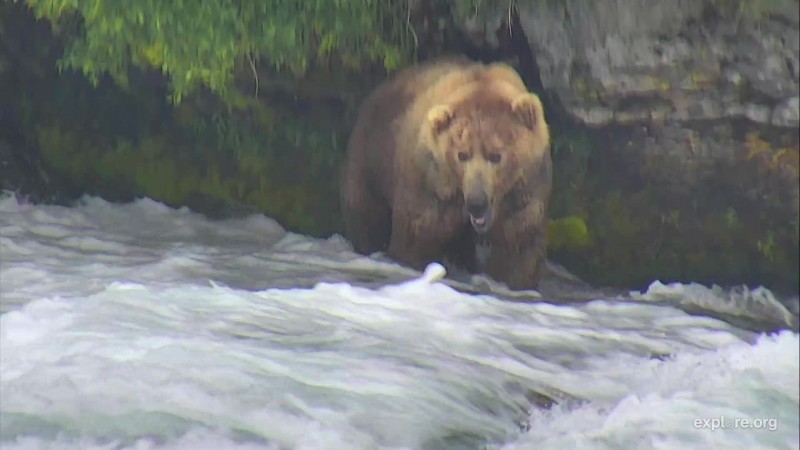 With the return of dominant bear 856 to a healthy condition this year, he has been re-asserting his dominant position frequently at the Falls.  He’s been regularly seen running off less dominant bears from the area. 747, the bear who’s perhaps second on the dominance ladder has tried to stand his ground with 856 to the point of having an altercation with him that resulted in the two of them exchanging blows and bites near the island.  747 was knocked down in the water during the brief conflict, but still appeared to get in some good swipes or bites. 856 turned his back and walked away afterwards, declaring himself the victor. Video of the encounter can be seen here. Mike discusses the dominance of 856 here.

The battle for dominance extends beyond the bears at the top.  747 has briefly battled with 634 Popeye to assert dominance. 480 Otis and 83 Wayne Brother have also argued over the jacuzzi, and we continue to see constant shuffling for fishing positions at the falls with the more dominant displacing the less dominant. 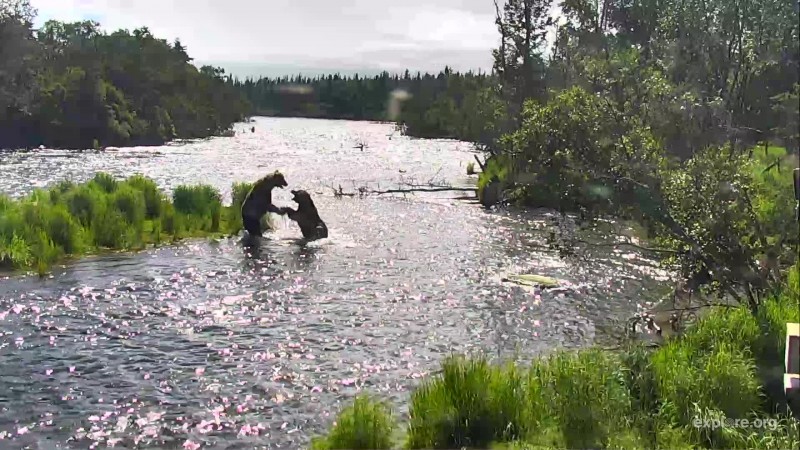 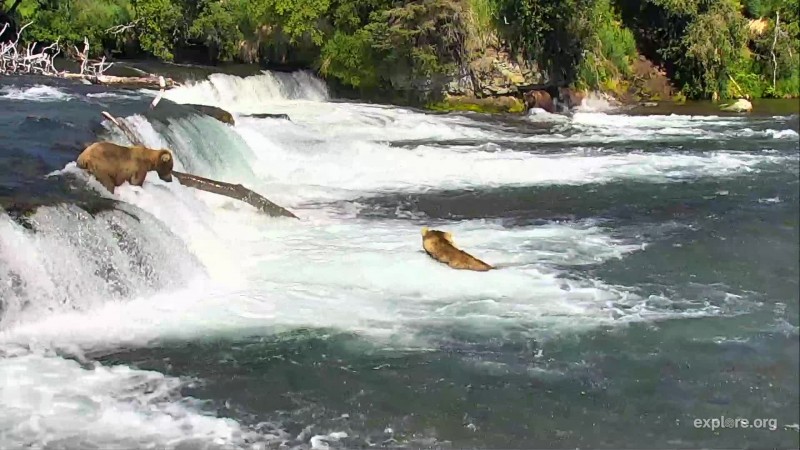 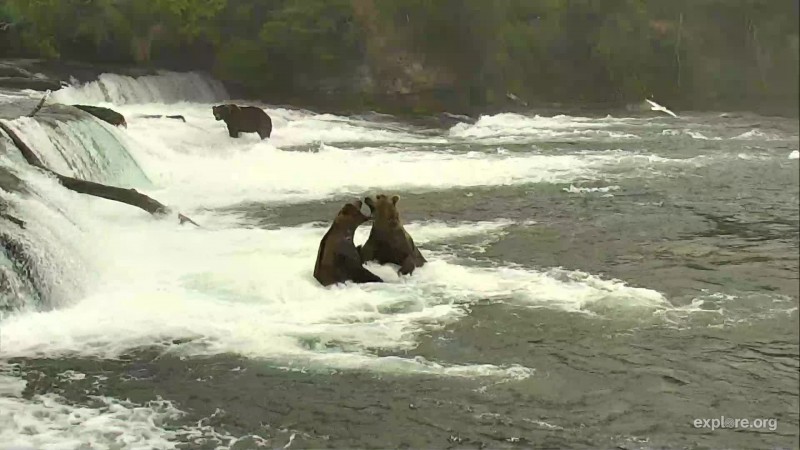 Favorite lip fishers 409 Beadnose and 128 Grazer have been having success on the lip.  We also have a few younger bears who are attempting to learn to fish on the lip and having some success at it.  Video of 409 Beadnose fishing the lip can be seen here. 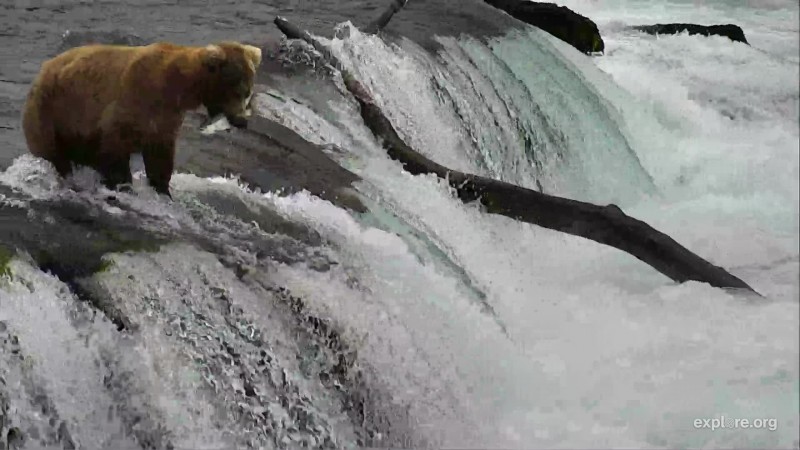 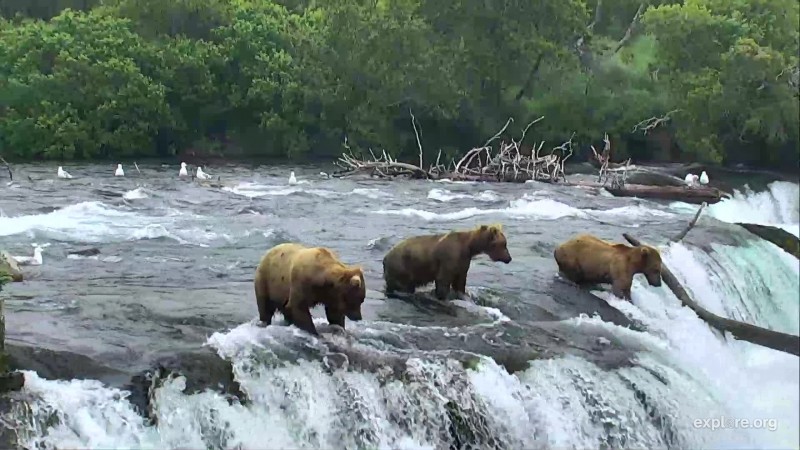 2 subadults join 409 Beadnose on the lip

435 Holly and her yearling cubs have been seen at the falls on more that one occasion this past week. Video of them at the falls can be viewed here. 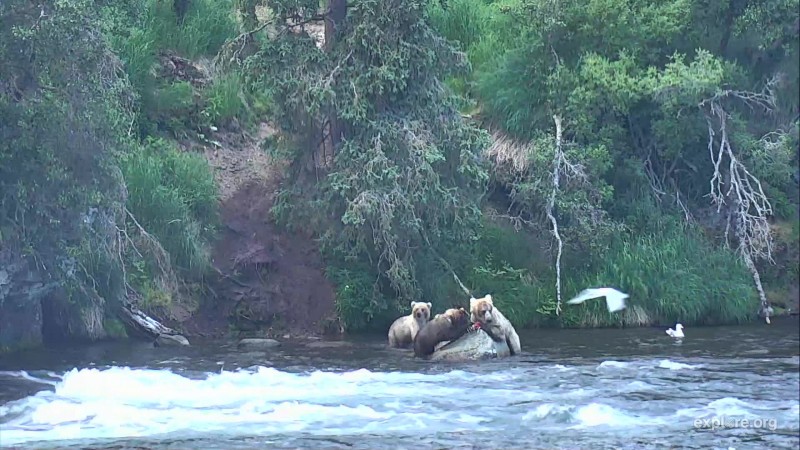 435 Holly and yearlings at the falls

We’ve been seeing many, many sub adults at the Falls, Riffles and Lower River cam areas.  While chatters have been doing a lot of comparing and guessing as to the ID’s of these subs we have had no confirmed ID’s. Subadults playing on the LR 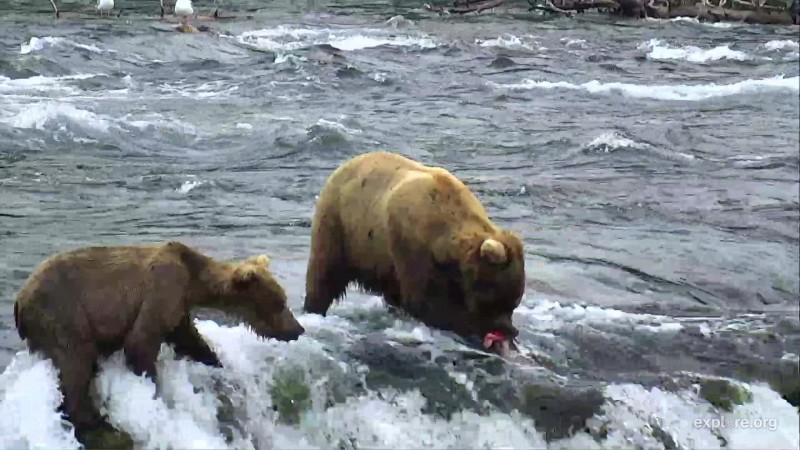 Subadult begs 409 Beadnose on the lip

Early in the week we had reports from the Rangers of a sow with two spring cubs or COY (cubs of the year) being seen.  This sow was later identified as 132. On the evening of July 3rd, 132 and her cubs had an unfortunate altercation with 856 near the Riffles viewing platform which lead to one of her cubs being killed. Below is a timeline of the events and some explanation from Mike Fitz.  You can also read a detailed Blog from Mike about it here.

“Here is a brief outline of the event on July 3 (all times are Alaska Daylight Time):
—7:30 p.m.: 856 chases 634 out of sight toward the riffles. This causes 856 to encounter 132 and her two spring cubs. 856 then kills one cub.132 tries to defend her cub, but cannot. Her second cub escapes to the top of a spruce tree. 132 and 856 leave the scene in alternate directions. After he killed the cub, 856 resumed fishing within 5-15 minutes.
—8:10 p.m.: The surviving cub bawls in the spruce tree, calling loudly every five seconds or so. A few bears pass by over the next hour and a half but pay little attention to it.
—435 Holly and her two yearlings spend about ten minutes near the lone spring cub. The yearlings, in particular, seem very interested in it. The cub in the tree continues to bawl. The brown yearling calls back to the cub. I hear huffing too, but can’t tell if its from Holly or one of the yearlings. The cub comes down from the tree as 435 and yearlings depart. About 10 minutes later, Holly and cubs are seen across the river. The lone spring cub vocalizes from the trees about 100 yards from where it climbed down.
—10 p.m.: A bear, quite likely 132, approaches the tree where the lone cub was. She then proceeds into the forest where the cub had walked away. I could not hear the cub calling at this time.

In the Bears of Brooks River ebook, there is an essay which I wrote a few years ago titled “Cub Killer.” In it I tried to briefly describe the competing ideas that might explain why bears kill cubs. You can download the book and read the essay here.” We received an update from Ranger Russ concerning 132 and her remaining cub on July 5:

“132 and springer, seen around 12:08pm local time today. This is the view towards the elbow from the corner bridge gate.” 775 Lefty made his first appearance on the cams early on July 5th.  He came through the falls area and did not receive a “warm” greeting from the other dominant bears, 747, 634 Popeye and 480 Otis.  747 tried to let him know who was boss and followed him up on the lip. 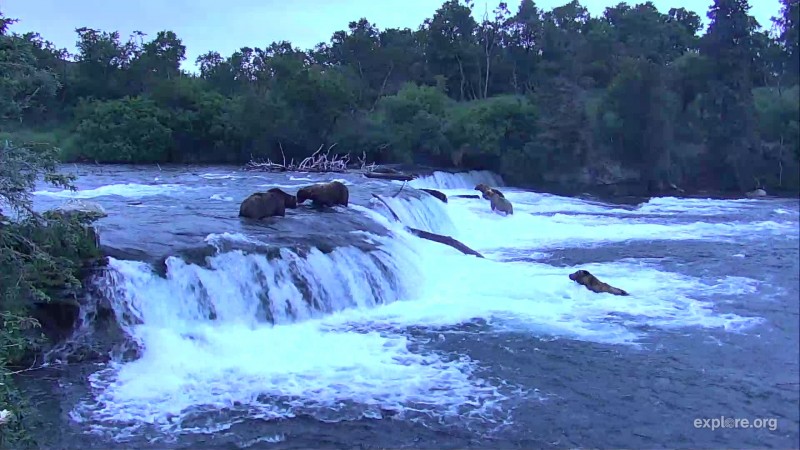 747 and 775 Lefty have confrontation on the lip Bear plays with stick in front of the underwater cam

The Dumpling Mtn cam also caught a rare sighting of a wolverine loping across the mountain. Video from RGW can be seen here.

The squirrel assault on the Dumpling Mtn. microphone continued this week. Two squirrels worked feverishly and managed to tear the entire mic cover off. The mic has since been moved to the steel structure of the repeater. 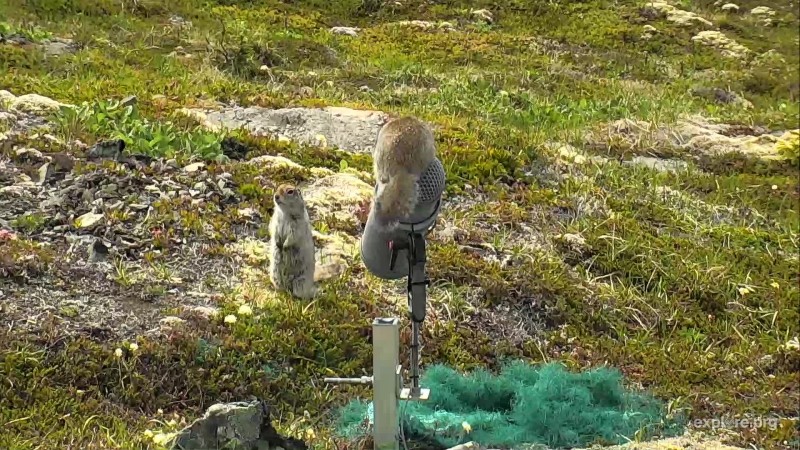 Two ground squirrels fight over the microphone on Dumpling Mtn

Finally, we’d like to know this:  If you were a Brooks Bear, what bear would you be?  Explore has created a quiz to help you learn the answer to this question!  You can let us know in the comments below the blog which bear you are.  Find the quiz here.

We also had a live chat and a few play by play’s this past week:

July 2 play by play can be viewed here.

Hibernation chat with Mike Fitz and Ranger Russ can be viewed here.