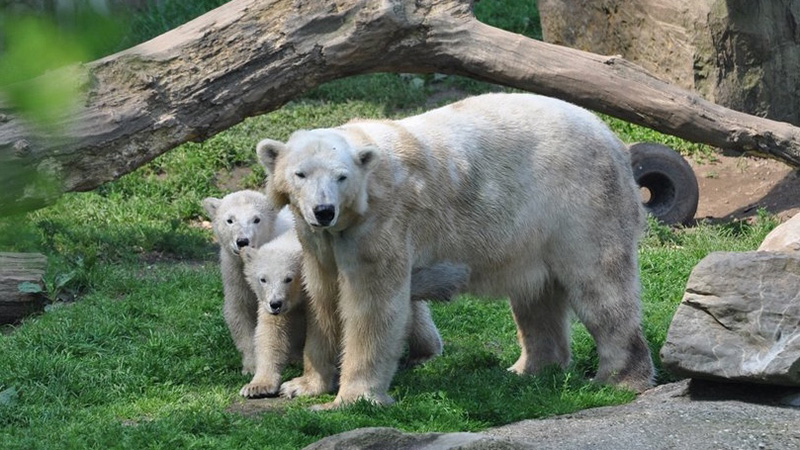 Huggies and her cubs

An Ouwehand Cam Update on Huggies

We know many of you are interested and invested in the future of Huggies and the Ouwehand Zoo cam, and we thank you for being such engaged viewers!

The health and happiness of these polar bears, whether or not they are on camera, are very important to us, the Ouwehand Zoo, and the greater explore.org community. As you may know, last month there was a concern from cam viewers that Huggies was stressed from a potential breeding situation; the cams were turned off while her living arrangements were adjusted. Neither Polar Bears International nor explore.org are experts in captive animal behavior, thus we reached out within our network to better understand what viewers saw on the cams.

We talked to animal behavioral consultant JoAnne Simerson, who has spent several decades watching and working with polar bears in the wild and in captivity. We sent her video clips of Huggies and Felix, and she was not at all surprised by what she saw.

“[W]hat I did see is normal polar bear breeding behavior,” explains JoAnne. “Felix is not an overly aggressive male, in fact he did quite nicely allow Huggies space. The paw lifting that was interpreted as injury is a normal behavior indicating “unsuredness”. It is seen regularly in both captive and wild bears. I don’t know how Huggies has received her other breeding partners. This just may be her way or perhaps she’s not “enchanted” by the new guy.

It is always shocking to see just how much larger male polar bears are than females.  Although he does bite her neck at one point, it does not draw any blood that I could see.  And we all know that blood is sometimes drawn even in play fighting.”

JoAnne goes onto say, “As for when Huggie’s back legs tremble and shake, we also see this at breeding time with our females. Often they appear to have great weakness and slumped down on those back legs. I have showed video of a female with the great tremors to Ian Stirling [polar bear scientist] and he found it perplexing as well, guessing it was maybe a physiologic gear up to supporting the males weight?

JoAnne added, “I do love how folks are always wanting to fight for what is best for our bears and animals!”

So while this breeding behavior very understandably looked rough to viewers, it seems to be the norm for polar bears both in the wild and in captivity. Nature can be intense!

At the end of April, experts from around the world are convening in Europe for their annual meeting focused on the best practices in captive bear husbandry. Members from both the Ouwehand Zoo and Polar Bears International will be present and look forward to discussing many topics this week, including the Ouwehand cam. The explore.org community will be updated again after this meeting.

We can assure viewers that we have been in constant contact with the Ouwehand Zoo throughout the last few months and know that they are taking great care of Huggies and family; this polar bear family is well-loved by its keepers.

Thank you again for your interest in the Ouwehand bears and please look for an update closer to the end of April.